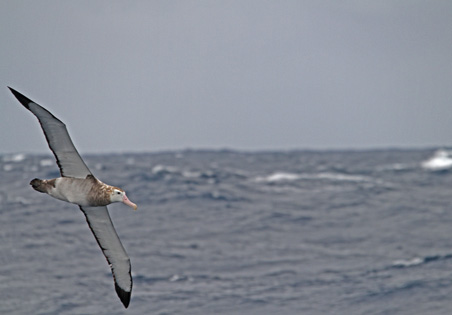 Another day in the Drake and so far the sea has been kind. Only a gentle swell despite a weather report that was covered in red scribble indicating high winds and high seas… looks like we managed to squeeze between the weather systems. In fact right now we are flanked by two other expedition vessels that all left Ushuaia on the same day as us. I feel like we are part of a fleet setting off to invade the Antarctic continent! Otherwise a typical day at sea: an early start up on deck taking photographs of the birds drifting behind the boat riding on the wind, then a couple of talks to tell the passengers about the birds and their biology and now a few minutes to myself to get myself ready for the next round of lectures and our landfall in the South Shetland Islands which at this rate should be tomorrow evening. The highlight of the day was watching a juvenile Wandering Albatross effortlessly skim over the waves as it turned its eye upon this strange interloper clinging to the rails on a slippery deck while pointing a long lens in its general direction while at the same time trying to duck the occasional wave. My impression was one of grandeur and grace… I can’t help but think the bird considered me in the amusingly clumsy category.

This entry was posted in Drake passage, Patrick in Antarctica. Bookmark the permalink.