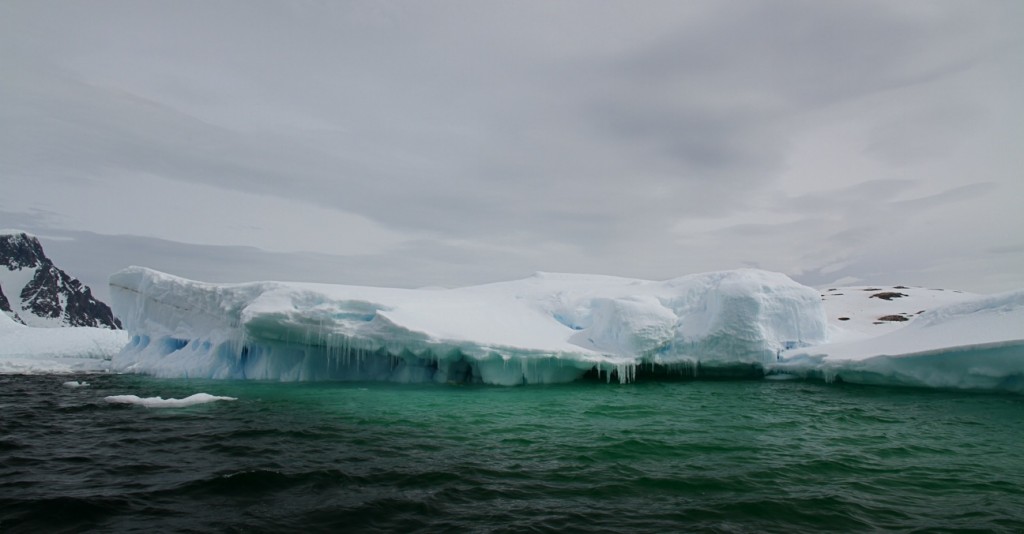 Today while pottering around the twisting maze of channels in the Argentine islands in a small rubber boat it wasn’t the spectacular ice formations or the seals and penguins that caught my interest – it was the teeming swarms of tiny planktonic mollusks. They are called Pteropods which literally means “winged foot” which is a pretty good description. They have a small coiled shell mage of aragonite (similar to calcium carbonate found in your average mollusc) but rather than the typical slug like foot of your average mollusk these guys have two wings which they use just like birds – to slowly flap their way through the water and keep up near the light where all the food is. While not many know much about Pteropods they are an essential and important part of the food web in most oceans. Unfortunately they are also under significant threat from human activities. The hidden catch 22 with climate change and the carbon in the atmosphere is that most of that Carbon Dioxide ends up in the ocean where is forms carbonic acid. An important exit for the gasses that are causing dramatic climate change but unfortunately the result is that the seas are slowly becoming more acidic. The sad news for Pteropods is that in the increasingly acidic waters they are no longer able to build their aragonite shell, especially in cold southern waters. The result? Many believe we will lose some of these fundamental organisms in only decades leaving a critical gap in the ocean food chain. Watching these small winged mollusks slowly flap through the still waters of Antarctica was a special sight and one that may be hard to come by in the future.

This entry was posted in Argentine Islands, Conservation, Patrick in Antarctica and tagged Pteropod. Bookmark the permalink.