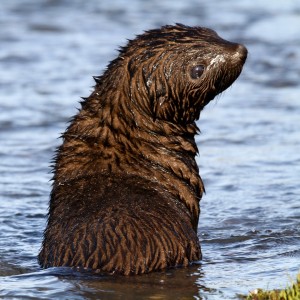 It’s been a fantastic visit to South Georgia. In a part of the world renowned for savage weather we have had day after day of calm waters and uninterrupted opportunities to visit probably the most spectacular place on the planet. As I write the heavens are lit up in a brilliant sunset of pink and orange hanging above jagged mountains and glaciers and the sound of fur seals calling and mewing can be heard resounding over the still waters. Yesterday the highlight of the day was standing up to my waist in a still pool while a tussling playful group of over thirty seal pups played and twisted in the clear water. And after I’d been there a while they decided to include me in their game with one particularly brave fellow showing off to his mates by swimming between my legs again and again. At this age they are just like puppies… unfortunately in a couple of years they will be staking out a patch on the beach and tearing apart anyone silly enough to enter their zone. For now however its all fun and games. 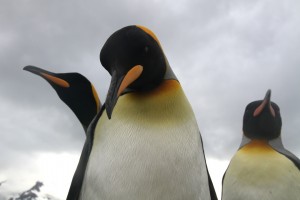 And today … the highlight was St Andrews bay which is the largest king penguin colony on the island. Standing on a moraine ridge you have tens of thousands of birds filling the valley so that the landscape is literally formed my a seething mass of colourful birds. As a setting they make it one of the most remarkable sights in the world. As individuals, the penguins show a grace and curiosity that is humbling. Laying on the beach while a dozen penguins gather around and gently probe this strange alien apparition with their bills instils you with a new sense of oneness with this fantastic place.