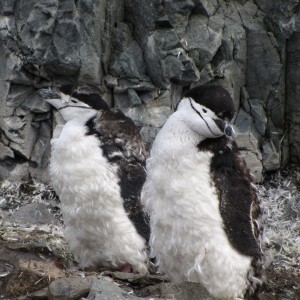 Once again we are bidding farewell to Antarctica – at least for another five days until we are back again. Today greeted us with gusty winds and a high probability of no landings at all, but we managed to find a sheltered anchorage at Half Moon Island and got ashore for the morning. It’s an incredibly different place at the South Shetland Islands right now. The snow has been cast aside at the end of summer to reveal the rock of the islands. The landscape has been transformed from one of icy blues and whites to one of brown rock and rivers of red mud. Red of course because the mud is comprised of penguin guano which is, in turn, comprised of digested krill. Needless to say the whole place is a little on the nose. Definitely a feeling that the season is at its end now though as the breeding season is at an end and the only penguins onshore for the most part is molting chicks gaining their adult plumage before taking to the water. Being on land with nothing to do makes these little fellows incredibly curious and if your not paying attention you’ll be surprised by a gang of youths busily pecking at your knees and slapping your shins with their flippers. As they are in the process of shedding their your feathers they really have a disheveled look that brings to mind a gang of miscreant youths. The feathers are falling everywhere and drifts of cast aside plumage blow about your feet like the snow that was here but weeks ago.

This entry was posted in Half Moon Island, Patrick in Antarctica, South Shetland Islands and tagged Chinstrap Penguin. Bookmark the permalink.