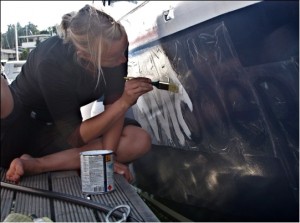 As I paint the hull of Widdershins with a thick coat of black antifouling paint it is worth thinking of the journey before us and the vestiges that we will leave behind us. The paint, you see, is an antifouling paint containing toxic copper compounds that prevent animals settling on the hull and slowing us down. Perhaps more importantly, the paint stops marine species from here in Norway catching a ride with us to the Arctic and ultimately even to the American continent. Having spent years as a scientist researching the types of impacts such alien hitchhikers can cause I am determined that our venture into the remote extremes of the earth will not be the vector for an invasion that will cause havoc to the natural environment. On the other hand, we will be heading north with a coat of toxic paint designed to slowly leach into the water. A bit of a conundrum. Some paints such as Tributyl-tin (TBT) have been internationally banned due to their toxic effects and though we aren’t using such strong toxins, copper paints have also been found to cause impacts in high concentrations.

Meanwhile, the University of Alberta has recently found toxic levels of mercury in the Arctic ocean http://www.montrealgazette.com/health/Deadly+form+mercury+found
+Arctic+waters+researchers/4691544/story.html – and to show how unpredictable these things can be. The origin of these toxins, which reached the oceans via our industry and coal burning plants, was originally a non-toxic form that unfortunately transformed into a killer neurotoxin that will affect not only Arctic wildlife but also the Inuit people that depend upon them. Remember also that the Arctic is one of the largest sources of whitefish for the entire planet!

As for me, I’m currently liberally covered with the toxic paint myself, not being the neatest painter on earth, so I guess I’ll be the first to suffer, but it is a reminder that when we set forth into the pristine frontiers of the globe we need to pause and consider all details to make sure we leave it in the same state we found it. In our case I hope we can leave it even a little better!