Sailing back in time

Today was all about history: starting with the search for some early stone age carvings, which were supposed to be on the way to a medieval monastery. The carvings turned out to be quite difficult to find, since we only had a vague description from a lonely planet guide book, which told us which tourist operator could take you there, but gave no directions otherwise. Furthermore we didn’t even know what exactly we were supposed to be looking for. But after about two hours of chugging along the coast and examining every possible rock with the binoculars, we were lucky enough to actually find the carvings! 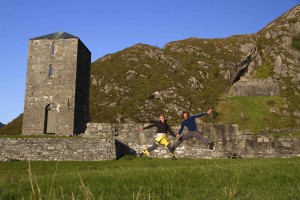 Seems like not too much has changed in Norway over the past few thousand years: We could make out a ship, lots of deer and a few sheep (although the latter might also depict zebras … ). 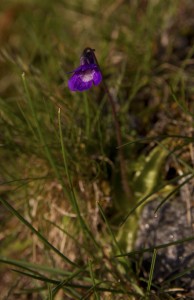 After a beautiful day we tied up at island of Selja, in front of the ruins of a monastery from the early 12th century. High above the scattered remains of the monastery there was a deep cave, where according to legend a Irish princess took refuge from a band of marauding Vikings. Devine providence proceeded to collapse the cave on head to save her from a fate presumably worse than death. This resulted in her becoming a martyr and a saint. However, we discovered that Vikings were not the only killers in the area – along the steep slope we found a more subtle assassin: Pinguicula vulgaris (no relation to penguins). These little carnivorous plants lure passing insects onto their leaves where they are snared on the sticky surface to be digested at the plants leisure.