Upon slipping into the water life here on Widdershins has certainly become more comfortable. No more scrambling down a rickety ladder to fetch water in the eddying snow for me! Indeed the weather seems appeased to see us floating again – the rain, snow, sleet and hail that have been my relentless companions these past weeks have been replaced by clear skies and sunshine. Barely a breeze disturbs the reflected image of the yacht which looks very smart in her new coat of Caribbean blue paint. There is time now to look around me – at the eider ducks paddling amidst the bobbing yachts, the young cod milling around the hull, and of course it’s hard to miss the strident call of the seagulls (no doubt bemoaning the fact that despite a plenitude of fish and potato, the Norwegians have taken to the idea of fish and chips). These next days until Leonie arrives in Tromsø are still filled with odd jobs and preparations, but the frantic pace that drove me until now has been eased, each day’s to-do list is less hectic. For example the main job for today was to try and get some laundry done. Simple you think? Well, actually there are no Laundromats in Tromsø, and it would cost 114 kroner per kilogram to get washing done for me …. The alternative has been a morning ringing out laundry by hand and festooning the rigging of the yacht in wet underwear and socks. 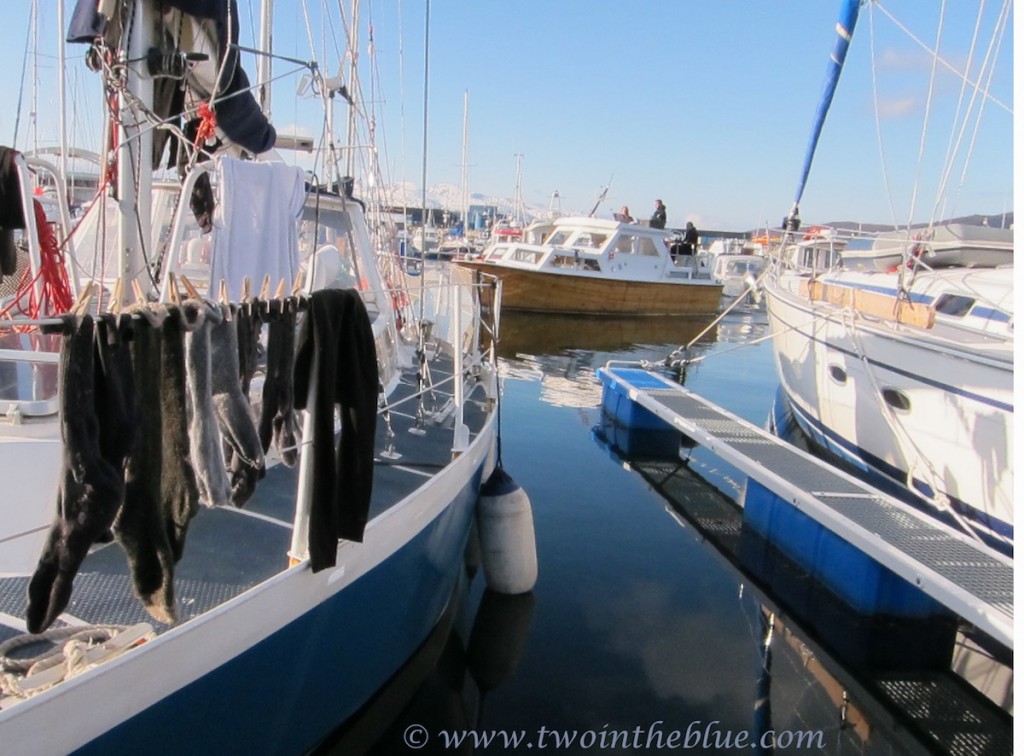 But enough of laundry and Laridae – when are we going to stop talking about adventure and actually go out and do it? Well time is a slippery thing and has a way of unravelling plans – our plans for the next couple of weeks (after Leonie arrives on board on 8 June)  includes an appearance for World Environment day, a series of dives for Reeflife survey around Tromsø and a little more shopping and preparation. Given these priorities it looks as if we will be able to steer a course for the north in mid-June. A little later than we hoped but still leaving us plenty of time for exploration!