Our own Iceland sagas: mechanics, not monsters

The history of Iceland is well known thanks to the Icelandic sagas that document the various battles and hardships undergone by the first Viking settlers of far-flung Thule. As we sailed towards Vopnafjordur on the East Coast of Icland we were reflecting a little upon the saga of the power struggle of the region between the clans of Hof and Krossavik, and also of the tales in the saga “Heimskringla”. According to legend, the first a sailor to arrived in the harbour found an enormous 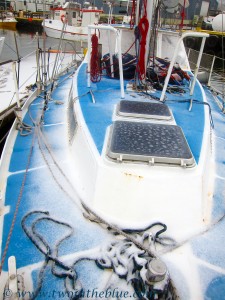 dragon guarding the bay and driving the sailors away with fire and his host of lizards and insects (the lizards must have been later eaten by the dragon since none exist here today). This tremendous beast has long been thought to be the guardian of northeast Iceland, and as wary seafarers we were looking to the skies for trouble in the form of fire-breathing leviathans. Alas, however, trouble again came from our increasingly temperamental engine rather than from any disgruntled dragons.

A few days ago the fantastic mechanics at Siglufjörđur finally managed to fix our previous engine woes. However, the rainy, windy and cold weather kept us for another couple of days in town, until finally a nicer weather window allowed us to pull in our lines and head east. And it felt great to be mobile again! The conditions were beautiful, the wind for once came from the right angle too (not from the bow as usual), and since we are really very far behind schedule, we decided to keep going through the night to cover as much ground as possible while the nice weather lasted. 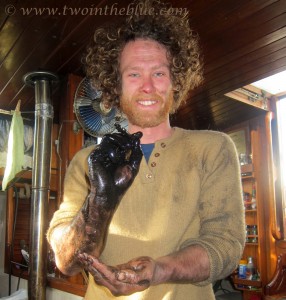 After over 30 hours of straight sailing we finally approached Vopnafjörđur, which is the only sheltered harbour between the bleak headland of Langanes and the fjords of the southeast. However, similar to our first approach to Siglufjörđur, just as we were in sight of the town, our motor started to play up once again. This time, the engine simply would not go faster than idle anymore. It was not really a problem to get into the harbour and we arrived with just the occasional “clunk” to betray our sad state. Yet now our mechanical sorrows are again the first priority. Right now, Patrick is trying to figure out what might cause this particular problem, and if he can fix it himself, though his oil smeared face suggests just a little hint of desperation. Since one of our next stops is the Faroe Islands, where roaring tidal currents of up to 12 knots surge through narrow fjords, we better make sure our engine works properly before hitting the road again … fingers crossed that it won’t take too long!

This entry was posted in Iceland. Bookmark the permalink.

One Response to Our own Iceland sagas: mechanics, not monsters