It’s been a few days now that we’re back on good old Widdershins. It’s great to be back – the slow rocking of the boat whenever there’s a slight breeze, the wind in the rigging, the quiet mornings between the mangroves … and not least the food! Admittedly it has been quite nice to be served every meal up at the chimp project, but daily doses of rice with either red or green sauce (we disdainfully called it red or green monkey poo) just gets old really quickly. Hamburgers, steak or even porridge on the other hand … as I said, it’s good to be back. 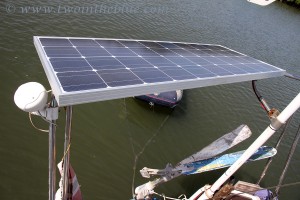 However, it’s a lot of work, too. Since we’ve come back we’ve done a major clean up trying to streamline our belongings (any read books or watched DVDs must go, any cloths for less than 20°C were put in storage, and any food that didn’t look like it’s up for an Atlantic crossing was chucked out). Of course a few things have also broken in the time we were gone – the stove keeps playing up (then again that thing must have been carried over from medieval times), the alternator that charges the batteries from the engine has broken, and the solar panel never actually worked … so, we scraped our leftover dalasis together, and purchased a new generator, a new solar panel and a new alternator. However, however … this is still The Gambia. Of course the new generator broke after half an hour of use. So, back into town, to get an upgrade. The screws of the regulator of the solar panel broke off during installation, rendering the whole thing useless and making a furious Patrick ride once again back into town to get yet another upgrade. We haven’t gotten a chance to install the new alternator yet, but knowing our luck … ah well, T.I.A., this is Africa.

This entry was posted in The Gambia. Bookmark the permalink.