A pinch of pride 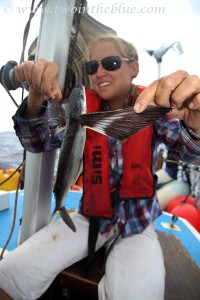 Seventeen days at sea is, to be honest, a little more pleasant to contemplate once safely ensconced in a beach side bar with a good meal and a few rum punches under your belt. To be even more honest, there were times over the past two weeks when both Leonie and I had cause to seriously question our sanity. Why exactly do we do these things? One view would be that the trip consisted of endless days of four hour watches spent gripping the tiller or wheel while spray flings across the cockpit and a progression of broken equipment proceeds to clatter, gurgle, clang, beep or persists in moody silence while you bang, tap, dismember or re-wire it in a vain attempt to produce a crackle of static. 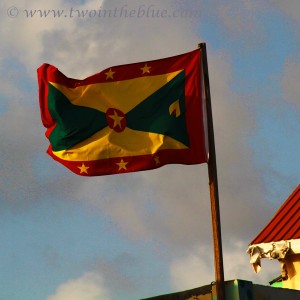 Examples of various misadventures suffered during our voyage include: parted genoa sheet (the thing that holds the front sail on snapped resulting in an alarming fluttering and flapping from the front (kind of like a Nasgul flapping with the fury of the dark lord and trying to drag you to Mordor); an unpredictable starboard winch that decides at random whether to happily retrieve rope or to suddenly spin uncontrollably in the wrong direction while repeatedly bashing Patrick’s knuckles with the still attached winch handle; a broken bilge pump (the thing that is supposed to pump out the water that is not supposed to be in the bottom of the boat but still persists in flooding in despite your conviction that it should not be there); another broken genoa sheet (return of the demented Nasgul); the companion way fell off its hinges (the bit that lets you into the relative comfort of the yachts interior suddenly decided that all the waves coming over the boat should also get a chance of shelter); a broken genoa pole (the thing that holds the sail out to catch the wind breaks resulting in a third round of bloody Nasgul attack) .. well the list goes on to be honest … 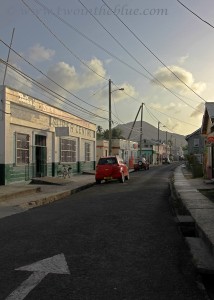 But then again there were moments where the sheer splendour of crossing an ocean washes away the hardship. There were some magic times on the passage that defy description. The days melt together and you mind roams on the long watches. You get a chance to contemplate the past, the present and the future in ways that you never seem to make space for in the real world. When you do raise your head from reverie you may be treated to a spectacular sunrise chasing you across the Atlantic, or a school of flying fish darting over the curled crests of the waves. Perhaps a low cloud will be racing you across the waves or a shooting star will blaze across the heavens pointing towards your destination. It seems that the highlights of the trip are condensed into instants of elation and exhilaration that more than make up for the intervening hours of blank effort to steer a straight course.

And now as I contemplate another rum punch there is another 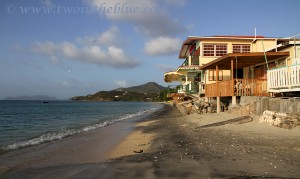 growing feeling that is threatening to swamp both the good and the bad reflections of the voyage – a feeling of pride. We two, poor sojourners and our dog have limped slowly across the face of the planet, chased the sunset and overtook her, swapped the cobalt blue ocean for the turquoise coral seas of the Caribbean and have learned a lot about ourselves in the process. We are also intimately acquainted with the bowel movements of our dog so perhaps we shouldn’t get carried away, but at the end of the day we are two very happy people with a pinch of pride that will stay with us for a long time (and a dog who is happy to be back on the beach).

This entry was posted in Carriacou, Grenada. Bookmark the permalink.