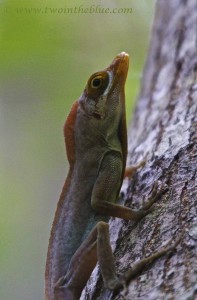 First of all: if you were wondering if we still exist: yes, we do. Why we haven’t updated the blog? What we’re up to these days? Where we are? Well … we’re currently in Prickly Bay, Grenada, after having spent quite some time in Carriacou: a small island belonging to Grenada. We’ve been busy, and then again, also lazy. We’re excited by the beauty of the Caribbean all around us, and then again … also a little tired of it all. The tourists, the touts, the heat and the hassle … oh yes, I am very aware that many of you would give a lot to swap with us right away, and don’t get me wrong, it’s not like I’m all that keen on sitting in an office again, goodness, no. 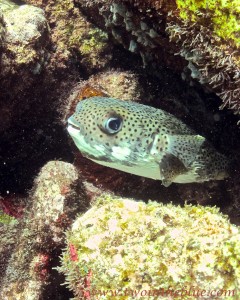 (cruising through icebergs) to the other (up to 30°C hot tropical water over colourful coral reefs) our tough old sailboat is slowly starting to show her age. Small things have been falling apart for a while, most of them easy enough to fix. But now some bigger things are also starting to break, most recent of them the rigging of the roller furling, which of course is crucial if you want to keep sailing. Our funds are starting to dwindle, and our morals are threatening to follow suit. We’re now at a point where we’re seriously considering calling an end to the adventure. Selling the boat and taking the easy way home (i.e. by plane) suddenly sounds sweetly tempting. 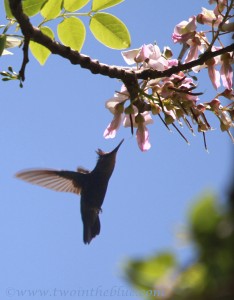 However, one way or another (i.e. whether we’re traveling on or selling the boat) we need to fix the boat up first. Fortunately enough we found a marina with second hand furlers for sale, but before tackling this big job, we decided that Widdershins definitely needs a new coat of paint. While sitting for over six months in the mangroves of The Gambia evil rust has made an appearance and slowly started to paint ugly orange streaks on the deck. So the last couple of weeks have seen the two of us bent over the deck, tackling the rust with grinder, sandpaper, primer and paint. 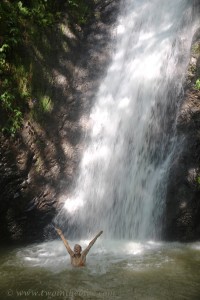 Despite having occasionally low morals we are also trying to enjoy ourselves. Just the other day we decided to explore some of the beautiful waterfalls of Grenada. Well, one cramped bus-ride with a suicidal driver later (wheels: smooth as a baby’s bum. Speed limit: to be ignored. Blind corners: who cares. Seat belts: hanging unused behind the seat … you get the picture) we found ourselves hiking up some steep hills through banana 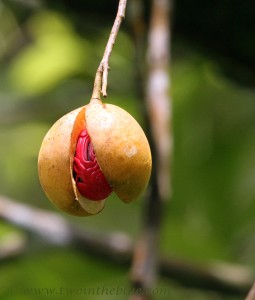 plantations, past houses on high stilts and trees bearing the national fruit of Grenada, the nutmeg. The first (and most commonly visited) waterfall was a bit of a disappointment, surrounded by tourist traps and touts, but we decided to follow the river further upstream, where apparently some more spectacular waterfalls were hidden in the rainforest.

It soon became quite clear that some preparation would not have gone astray – the path became more and more overgrown by the jungle and of course we didn’t bring a map. And the fact that we were entering the proper rainforest meant, well, that everything got a little wet. And muddy. Very muddy. Not good for flip flops, I can tell you that. But far from being beaten that easily I decided to 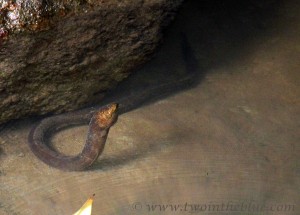 keep going barefoot, and soon enough our efforts were successful! The second waterfall! A much more impressive gush of water tumbled down a high, moss and creeper covered cliff, into a clear pool of cool water – a perfect spot to cool down after the heat of the ascent! Luckily we found the eerie eels half hidden under some overhanging rocks only after we got out, or I probably wouldn’t have touched that water with my big toe.

After this refreshing break we kept on climbing and skidding up the slippery slopes that only got muddier, along a path that got ever harder to find, through the forest that seemed to grow ever denser and darker and quieter – a fantastic adventure! Unfortunately it also got later and later, and being close to the equator dusk doesn’t last long, so being barefoot I wasn’t all that keen on clambering through the mud using a torch. Yes, surprisingly we did bring a torch. Then again, we also brought a tent, so we were not completely helpless. Once it became clear that we wouldn’t get out of the forest before night fell we started to look for a flat place (easier said than done in this jungle) where we swiftly set up our small tent, devoured our meagre dinner and promptly collapsed on our rather uncomfortable inflatable mattresses. 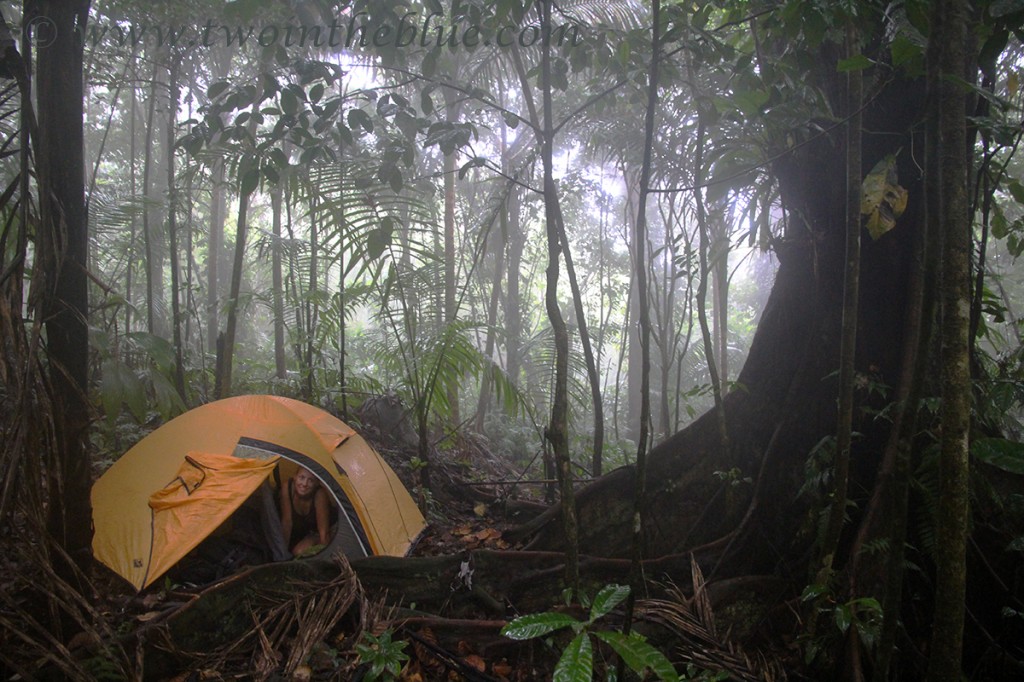 The next morning we woke up to a spooky, silent forest, with mist creeping around the trees and our tent and every branch dripping from the night’s rain. Not a chance to get the tent dry, so we stuffed the wet material in the backpack and went off again. After yesterday’s mammoth struggle through the unending jungle, a mere ten minutes stroll brought us to the end of the forest, and soon afterwards we found the first small road. Another hour later we sat once again in a cramped bus, survived the suicidal ride (this time the driver actually took the time to change three of the tires, although the new ones didn’t really have more profile) and soon sat down to a decadent lunch of real Italian ravioli – admittedly one of the advantages of a tourist island.

This entry was posted in Grenada and tagged Hummingbird, Lizard, Nutmeg, Puffer fish. Bookmark the permalink.