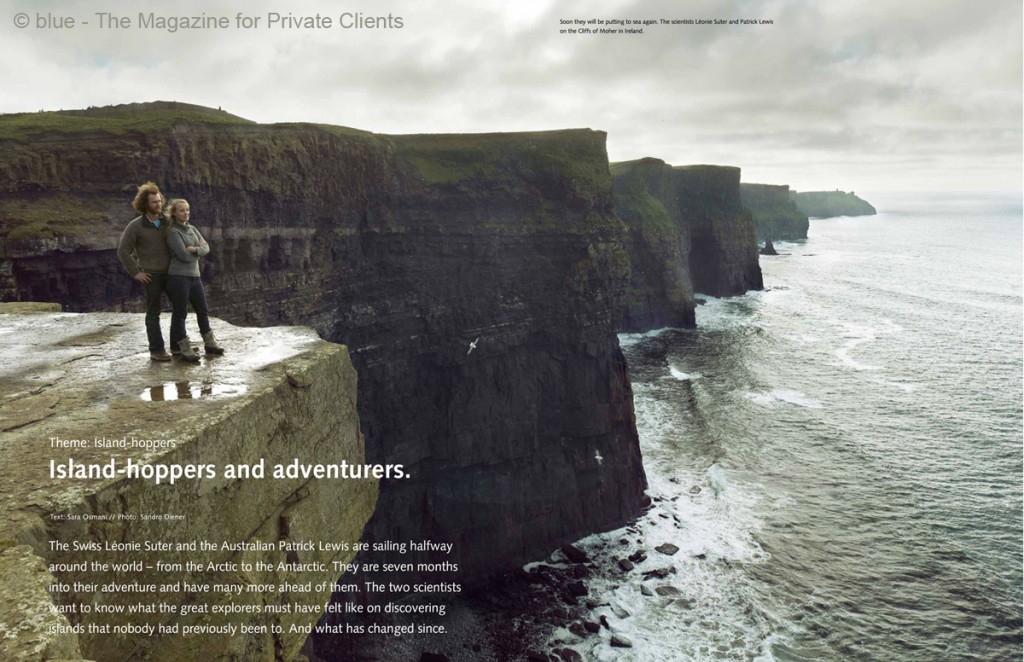 We are not particularly used to being too much in the spot-light, but about a month ago the folk from the magazine “blue” flew to Ireland to interview us and take our pictures. Mind you … While talking of our adventures we also managed to have a few on the way. If you look closely at the cover photo of the article you’ll notice that we both have a rather distracted look … bear in mind that after hours of make-up, primping and posing the shot that made it to press was snapped quickly as a security guard bore down on us screaming “GET AWAY FROM THAT CLIFF!!!!”. For those interested, the article can be viewed online at https://www.vontobel.com/INT/EN/blue (also available in German).

Readers of the blog will have come to associate two in the blue with the dizzying heights of fashion and style. With reckless abandon we have delivered a new season’s fashion featuring daring new combinations such as the “oil sleeve” coupled with torn trousers. Traditional forms of fashion have been tossed aside with reckless abandon as we delve into our new range exploring “forms of filth” and the “un”-range of style (un-cut, un-shaved and un-washed ….). The future is as yet unknown, however as we head to the tropics we are already plotting our summer range which will doubtlessly revolve around the “style of sweat”.

Yet despite our strong flair for fashion even two and the blue have been a little dazzled by the events of the past week. Upon tumbling out of the wilderness into the town Dun Laoghaire in Ireland we have been exposed to the professional world of Haute Couture. 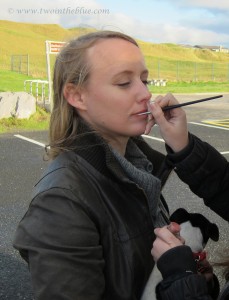 Perhaps I should take my tongue out of my cheek for a little … To be honest we were surprised and very grateful for a message from the Vontobel bank who wish to feature Leonie in an article to be released in early 2013. Equally we were impressed with the friendly and innovative crew who came to take photos and interview us about our journey and our future plans.

I guess the shock from our side has been the sudden immersion into the 21st Century. After drifting around aimlessly on the oceans with a time-table set by the sun and the stars we have suddenly been thrust into a world of deadlines and meetings! Case in point: the mobile phone. We do own a mobile but due to our erratic path it is rarely in range and even less often turned on. But lately we have had to reaccustom ourselves with the constant threat of … A phone call! It is strange how daunting the idea of actually expecting a call can become! While we regularly make calls to other people these days we don’t often receive calls … and having had to be on call this past week has actually been an odd experience. Strange as it may seem … we are simply not used to being “contactable”. When the 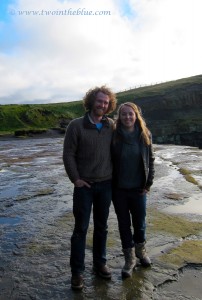 phone does ring it makes us jump about two feet in the air  – by the time we’ve found the phone (normally buried under discarded sailing equipment) it is, alas, often too late.

Nether-the-less, we have really enjoyed the past couple of days. Having seen Leonie emerge from the attentions of an award winning makeup artist to be placed barely a meter from a plunging cliff did cause me moment of concern (equal parts of “what did you do with my fiancée” and “should I save this beautiful stranger from a 200 meter fall or go off and find Leonie”). But soon we got into the spirit of things and had a great day topped off with a pint of Guinness and some fish and ships. Even Sparrow got into the act and ensured that she featured in a few of the shots. A very pleasing diversion from exploration towards elegance … check out “Blue” magazine in early 2013!