Pals from the other pole

Today as we were exploring Goudier Island in the Antarctic Peninsula I spotted a yacht that seemed vaguely familiar. Upon closer inspection it turned out to be the Anne Mari (http://annemaritilantarktis.blogspot.com), a Norwegian yacht with a number of sailors aboard that I had been in touch with a few years ago in Oslo, Norway. Seems they have sailed all the way from the Arctic circle in Norway to the Antarctic Peninsula over the past year and are now exploring the icy tip of Antarctia! Unfortuantly some of the folk I had hoped to catch up with on board had not been able to make it this far south but it is such a wonder to see familiar faces down here. It seems the spirit of adventure is still alive in the frozen south and the paths of those that dare are destined to cross!

I find myself aboard a new ship in the new year and am now exploring the convoluted passages of a Russian icebreaker as we charge through the mist shrouded waves of the Southern Ocean. In fact just one hour ago the fog that has accompanied us for much of the day parted to revel the first glimpses of the Melchior Islands and the first land we have seen for a couple of days. As the sky continued to clear, penguins became apparent followed by a couple of humpback whales spy-hopping and sounding just meters from the boat. 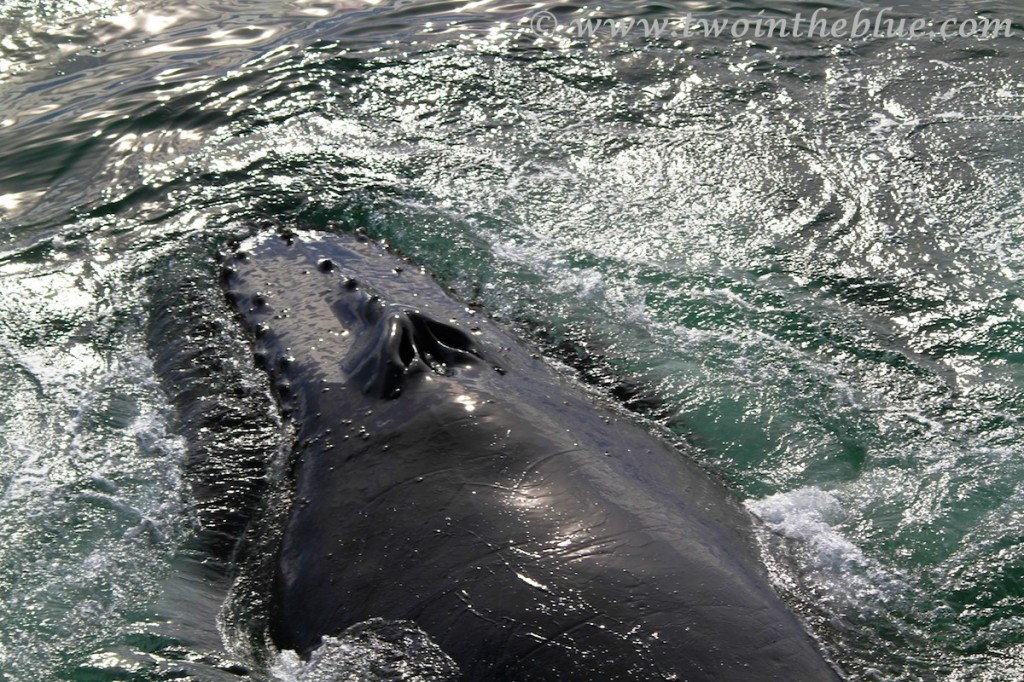 Not a bad start to a new year and a new venture aboard an old ship… very much looking forward to the next couple of days as we push south towards the Lemaire Channel and the icy south of the Antarctic Peninsula.

Today we have spent the day in the Lemaire Channel and Port Lockroy basking is sunlight and scenery bathed in one million shades of blue and white. Ice prevented us passing through the final stages of Lemaire but neither the less the sheer cliffs raising on all sides and the ice stretching out in to the horizon is a sight to instill wonder on even the most jaded of souls.

Despite the views though, the highlight of the day was actually related to the general day to day running of the operation here in Antarctica. Today I was driving the zodiac (rubber boat) back to the ship when I noticed one of the other zodiacs looked slightly odd. So … after a brief investigation and a lot of laughing I realized that the driver had managed to drive up onto a block of sea ice to the extent that they were completely high and dry with ice on all sides! 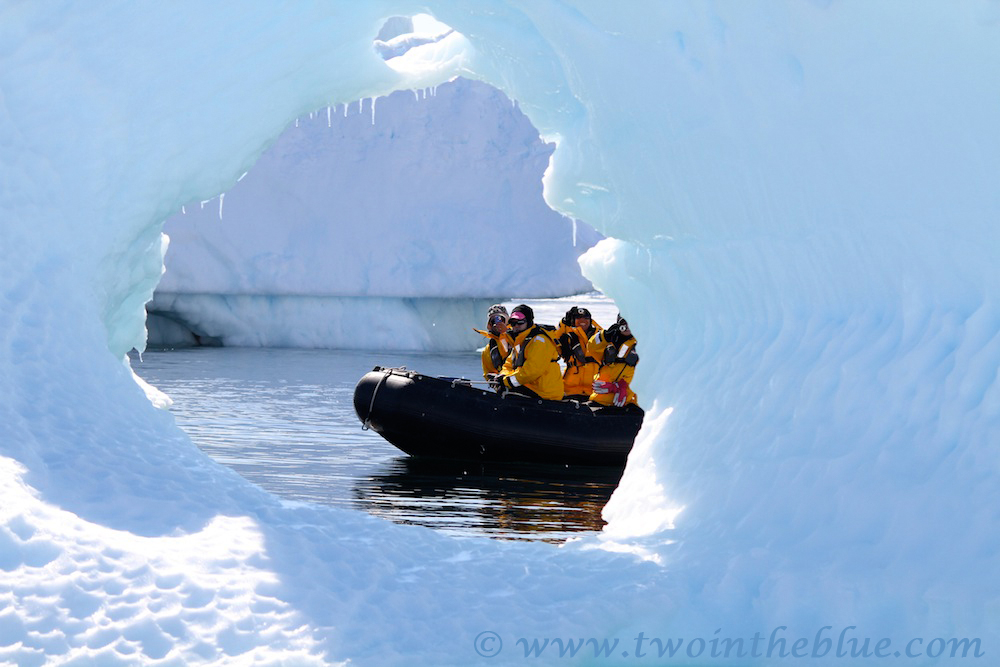 This was a zodiac carrying kayaks, and in order to prevent a long journey towing kayaks through a strong wind they had piled all the kayaks at the front of the zodiac and left the passenger at the back. The problem? You can’t see where you are going. Despite the apparent disadvantage of this mode of travel, they had successfully  maneuvered through a few hundred meters of water before hitting a slab of ice at speed and coming to an abrupt and rather hilarious stop. Literally a boat out of water. Took a lot of effort to drag the zodiac, kayaks and grinning passengers off the ice but I can guarantee they all left with a story that they will be retelling for years to come! Amazing how it’s the misadventures that loom large in the memory. 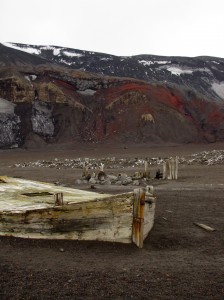 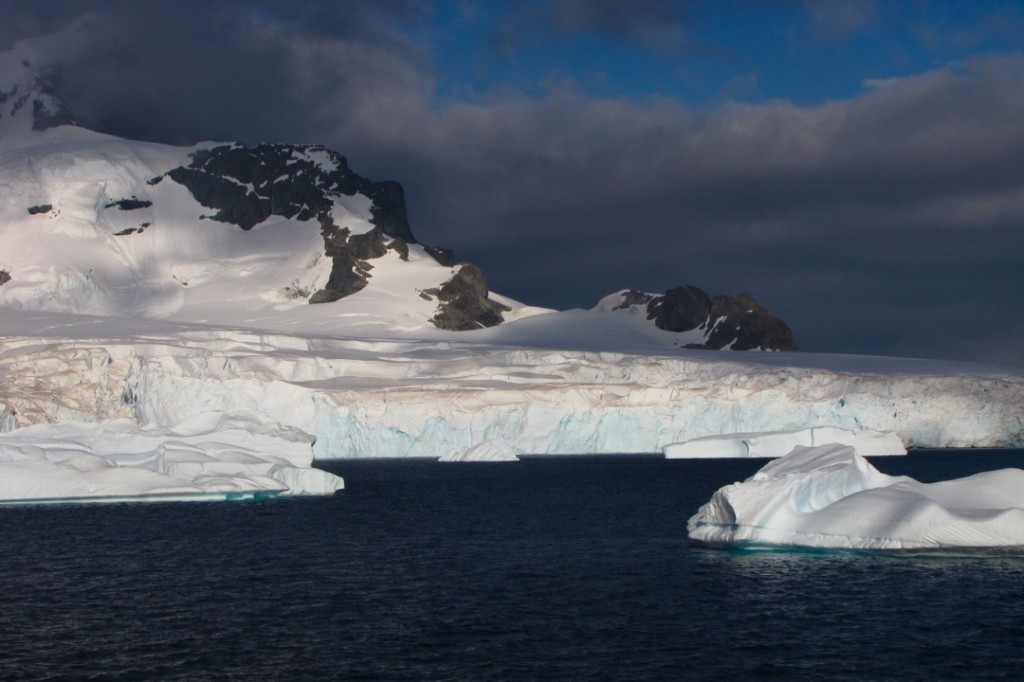 Today we spent a relaxed day with a morning landing and cruise at Port Lockroy were the passengers indulged in some Antarctic shopping before cruising amidst beautiful icebergs against a backdrop of surging glaciers. The sun just peeked through the looming grey clouds to brush the mountain-tops with colour and the wind paused to catch its breath leaving the ocean like a mirror. In a way this is time to say goodbye to Antarctica as tomorrow we leave the continent and head for the South Shetland Islands just to the north of the Antarctic Peninsula. I have a feeling that the drake will not be kind to us on our last crossing but for now I feel that Antarctica has sent me a final pleasant farewell and has sent a welcome note for two in the blue. Next time I see these towering mountains it will be from the deck of Widdershins with Leonie. 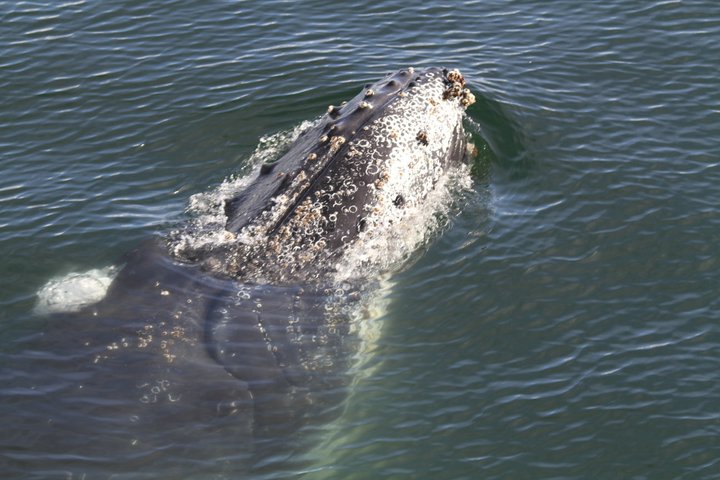 Today we had a pretty wild windy day at Dorian bay and made our way to Fournier Harbour which is a large sheltered bay surrounded by glaciers tumbling into the sea.  As soon as we arrived the wind started to dive down and we were surrounded by feeding Humpback Whales. The engines on the ship were lowered and we coasted into the very thick of a churning mass of feeding whales gorging themselves on the dense krill just thirty meters below the surface. As we lined the rails of the ship we saw spiraling bubbles emerge from the depths and float towards the surface in concentric circles until a large whale surged through the centre of the rings with water spurting from its baleen plates and krill scattering in all directions. The lead whale would soon be followed by two younger whales learning the game of bubble netting and taking advantage of the skill of the lead whale. Also notice that as the whales charge to the surface they have their eye close, no doubt to keep our the krill and to prevent damage from the wheeling seabirds overhead taking advantage of the craft of the whale. It was a pretty spectacular fair well from the Antarctic as we once again turn our bows towards the Drake Passage and Ushuaia. 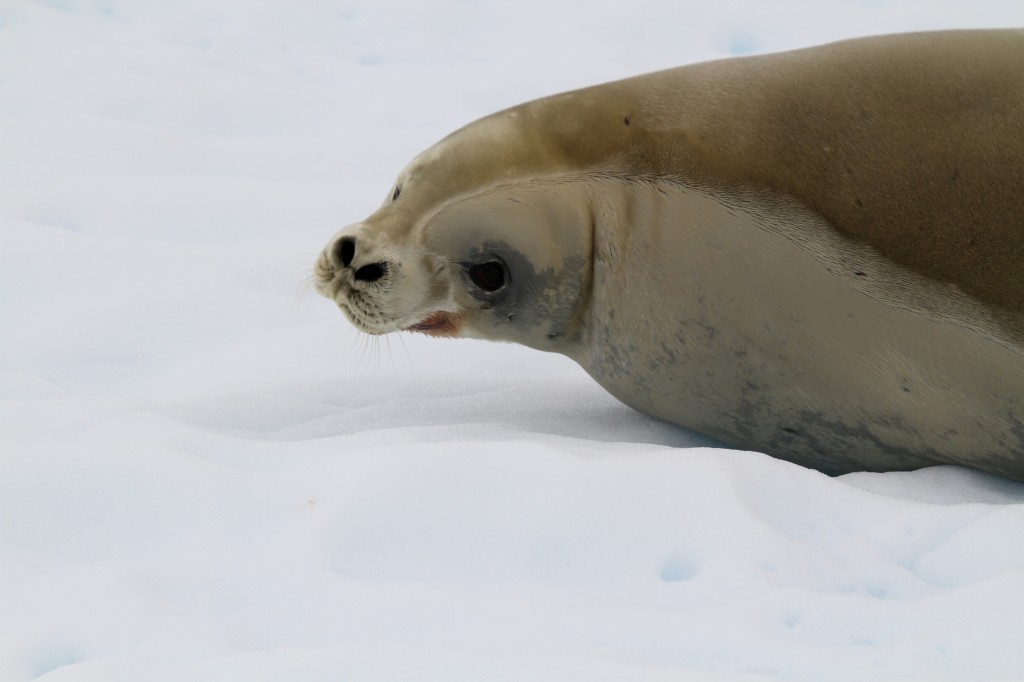 Today the ship was a bit subdued after last night celebrations but we still were up early for a landing and a later ship cruise. Nothing to clear the head of celebratory fog like tearing through ice-cold air in a speeding zodiac. Right now we have cancelled the planned nights camping at Dorian Bay due to a screaming wind from the north. As it turns out the wind is doing most of its screaming through the rigging of two yachts anchored in a nearby bay which makes me green with envy … despite the rough weather I look forward to the day that it is Widdershins standing proud in the cutting Antarctic wind. 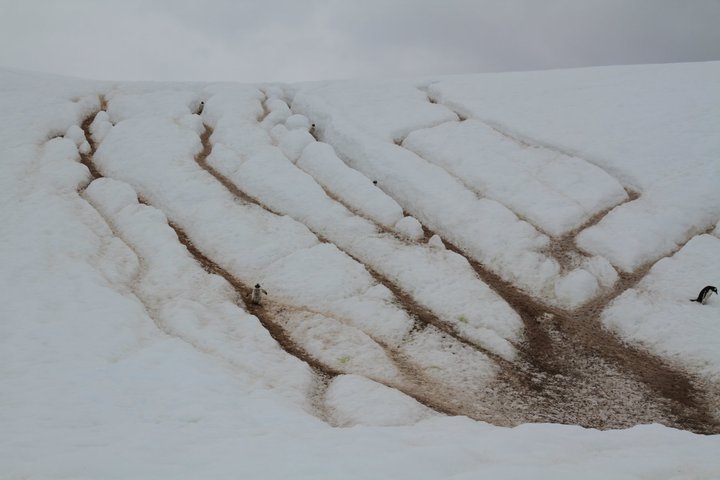 Christmas in Antarctica is always a blast… but not much time for a lazy day sipping beer with friends and family. Up early for blast around Danco Island to play with Gentoo penguins and to work up an appetite for Christmas lunch by scaling the peak of the island to chill with the penguins which have also decided to scale the height on their short stumpy legs … actually there is a reason for that – the snow high up melts early and allows the penguins to lay their eggs at the first possible moment. Seems absurd to see the penguins climbing so high but mother nature always has a cunning plan! After Danco we did more cruising and a walk around Dorian Bay where the Minke whales came to visit … and while we were all out in the boats the ship crew were preparing the Christmas BBQ on board which finished the night with revelry, fun and much good cheer in the form of various beverages… 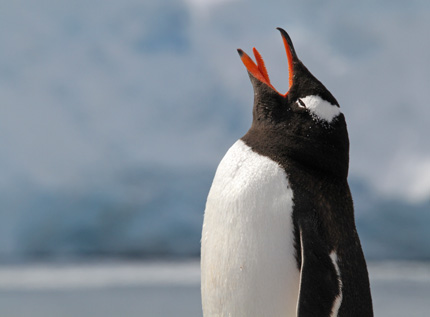 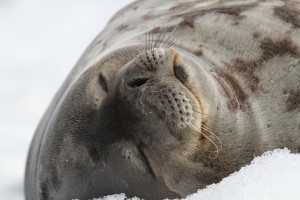 Today we climbed up to a ridge overlooking the British base Port Lockroy and had a stunning view over to the mountain range named snow white and the seven dwarfs – the range has a white peak followed by seven smaller peaks all in a row. The horizon stretched forever, the sky was a deep blue and the white sparkled. But despite all the wondrous scenery, my eyes were drawn to the foreground where a small red yacht was tucked into a sheltered bay behind Port Lockroy. Two years and we’ll be here under our own sail, and despite the daunting barrier of the Drake Passage, stunning days like this make me long to be here with the freedom of the southern winds in our sails. It also makes me think … I’m pretty lucky to get down here, privileged in fact. The Antarctic holds a rare beauty that draws you in and holds you fast. We head back to Ushuaia tonight but already I’m looking forward to coming back in four days and watching the penguin colonies change with the passing season and welcome the whales back to the Southerly feeding grounds. It’s a tough job …