The bird that makes the wind blow 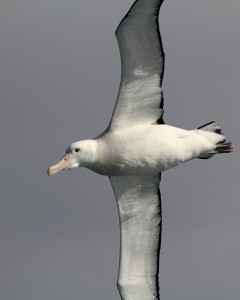 R.C. Murphy once described the albatross as the `bird that makes the wind blow` which is pretty fitting since we visited Prion Island today to look at some nesting albatross while it blew 40 knots of wind. Despite the gale and the driving rain it is breath-taking to see these birds up close. A 3.5 metre wingspan is enormous but almost impossible to judge when the birds are on the wing with an endless horizon behind and a sweeping sea-scape below… but on the nest you start to appreciate how big these birds are, though admittedly the graceful flight at sea is replaced by a somewhat clumsy waddle as they pick their way through the tussock and crash to earth in a stumble.Watching the birds delicately preen each other in greeting andstretch their wings into the wind makes up for their awkwardness… and being the king of the skies there really is no need for them to perform on earth as well – they are creature of the southern winds and are only bound to land briefly to breed before once again taking to the air. Either way it is a privilege to observe these majestic animals up close, and a fitting farewell to South Georgia as we set sail towards the Antarctic Peninsula.