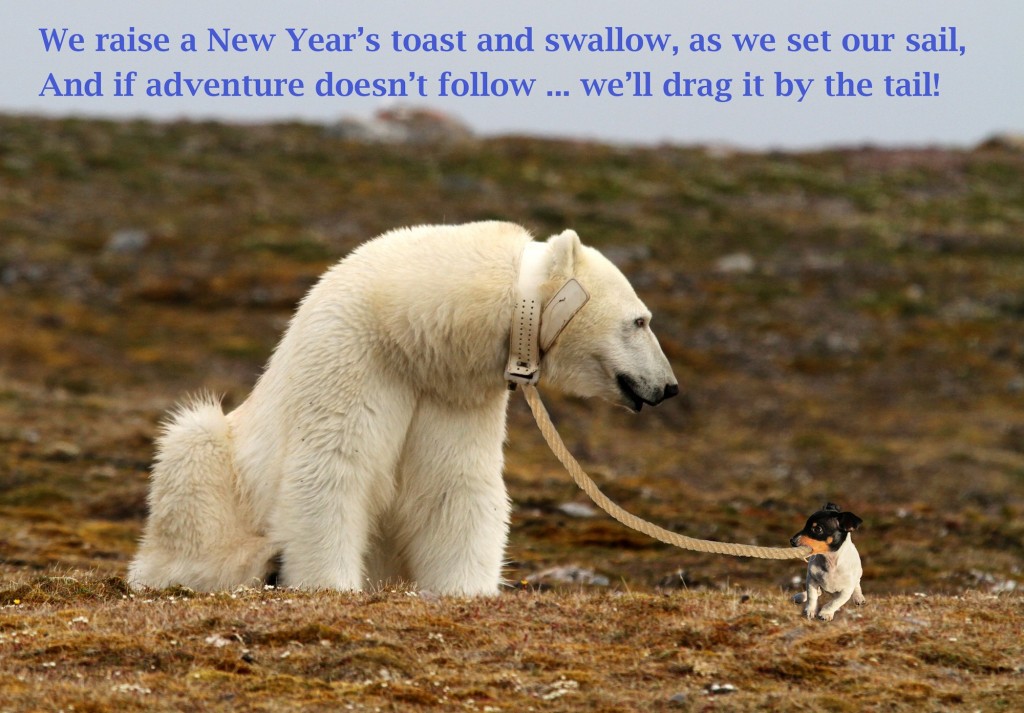 With Christmas behind and the New Year looming around the corner Leonie and I are sitting in a bar in the Spanish town of Cariño reflecting on our adventures of the past six months … and also dreaming of the adventures to come. Also around the corner (in a geographic sense) is the infamous Cabo Finisterre which is standing between us and the tropical seas beckoning us in the low latitudes. Finisterre has already sent us back with our tails between our legs after one attempt … contrary winds and big swell left us battered and bruised and back where we started when we made the attempt a couple of days ago … it also posed the perfect opportunity for the second, and also this time successful, escape attempt of our inflatable rubber tender “Brad”.

Those of you following from the start might recall that Brad made his first attempt for freedom while we were towing him around a headland in the south coast of Norway. On this attempt the bright red boat ended up bobbing free in three meter waves after the tow rope snapped – but after an epic battle with a boat hook we managed to shackle our wayward boar again (though in the process we got the snapped rope wrapped around the propeller and were forced to limp back into harbour.

Alas sometimes lessons learned are lost … again we were towing Brad around a headland in the north of Spain when raising winds and waves served to shear the shackles that tied the rascal. This time however he made his dash while our backs were turned. Given the strong Southerly winds that have been plaguing us of late we figure Brad is well on his way back to Iceland by now (Margrét and Guðni, watch out!). If anyone sees a bright red boat bobbing around the Atlantic please give it a kick from me!

Despite this seeming calamity, the laid back atmosphere of the Galician coast of Spain seems to forbid us from being too distressed. There is always “mañana” to worry about such things and for now there are clean beaches, palm trees and a dazzling array of cafes offering wine to sooth the nerves and “menu del dia’s” to turn the walk home into a waddle. There are certainly worse places to spend Christmas and the friendly locals have given us a warm welcome (along with some odd looks at the crazy tourists wandering on their beach in shorts and thongs while they huddle in their winter jackets!).

Making way for the merry season

Our stay in Viveiro has been very pleasant with the calmest night’s sleep we have had for some time – the marina being situated a short way up the Rio Landro is splendidly sheltered after the previous marinas which have been exposed to a constant swell that has chafed our nerves and our ropes in equal proportions. Despite a cosy mooring and a picturesque town however, Christmas is rapidly drawing nearer and the intention was to be in Lisbon (or even Morocco) for the merry season. Thus we were pleased to note that the wind had died down to a gently breezed today – looks like it’s time to make our way further to the west!

A jump in the puddle 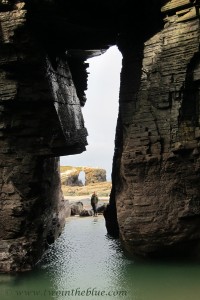 With a series of southerly winds pinning us to the harbour of Ribadeo as we wait to round the notorious Cape Finisterre and head south, we have been forced to explore more of the local region than we thought we would have the chance to. Very arduous it has been … sipping cerveza on the sidewalk cafes, dinning on the local paella (consisting largely of lobster), exploring the wave-wracked beaches of the Atlantic… True, some of the exploration has been conducted in the teeth of gale force winds whipping squalls of rain into our eyes … but at the end of the day it is all rather pleasant!

Today we took a train out to the Playa de las Catedrales where we wended our way past towering cliffs and through natural arches of rock. Our stroll was accompanied by the crash of waves on the white sandy beach that even got the chance to sparkle in the sun during a brief break in the looming grey clouds. The expanse of sand is usually thronging with summer tourists, but since we have landed well into the “off” season we virtually had this magnificent beach to ourselves with only a few other visitors strolling around in awe of this magical place. One of us even went for a swim … well I guess you would more accurately say that our little dog slightly misjudged the depth of a puddle – which turned out to be the Atlantic Ocean… 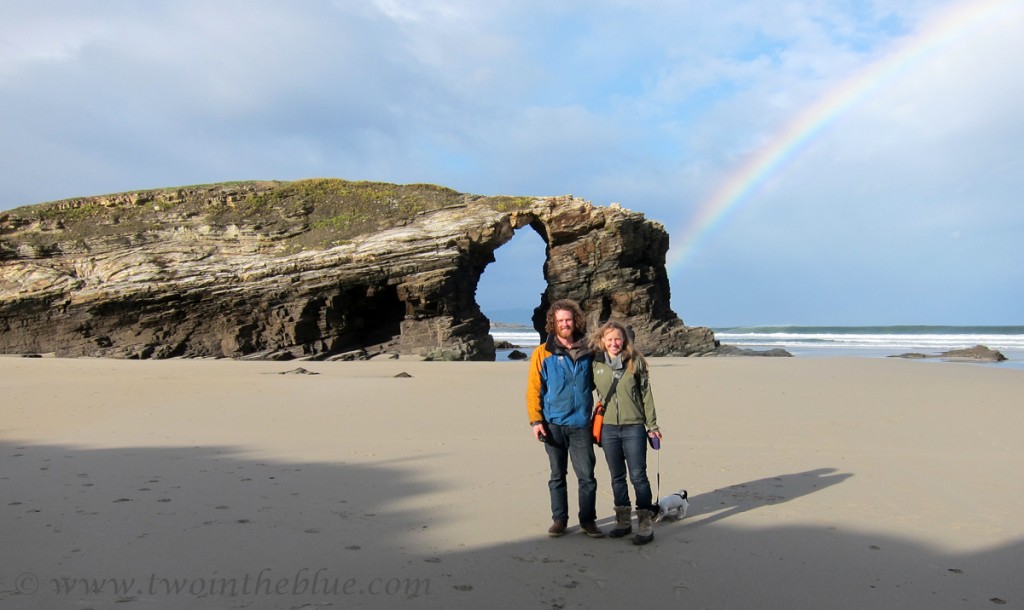 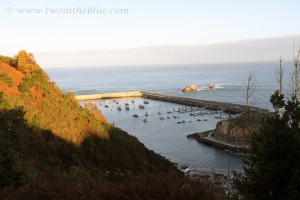 Well sailing along the coast of Europe has hardly felt quite so much like the wilderness that we set off to find six month ago. That’s not to say it isn’t stunning … the coastline of Spain has slipped gently by as the residents slumber their way through siesta (inevitably just as we arrive in port and need to get things done). The shoreline has transformed from the imposing cliffs of Asturias with its quaint compliment of old towns clinging to the rock, to the gentler green slopes of the Galician coast with warm winds and sparkling clear water thronging with fish. 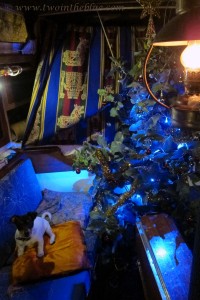 To add to the holiday feel, the decorations are starting to loudly announce that Christmas is just around the corner. In fact, stumbling across a small thicket of Eucalypt here in Ribadeo we have fallen into the festive spirit and the yacht is now permeated with a happy gum tree smell of home thanks to our choice of Christmas tree. Here on Widdershins we have been a little lulled by this festive atmosphere and heartily admit that the blogs have not been coming quite as quickly as they perhaps should. Thus we have made the commitment to ourselves that as we prepare to make the last dash out of Europe towards the exotic shores of Morocco and western Africa, we shall return to our commitment to the blog …. So stand by for updates! 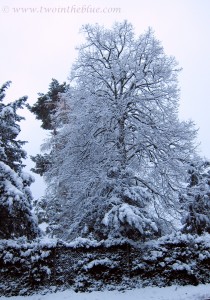 For other recent news, Leonie has just returned from a quick trip home to Switzerland for a last visit with friends and family before we leave the continent behind … despite the welcome and warm reception she received and the fantastic time sledging down snowy slopes the twenty centimetres of snow was enough to convince her that sailing south is a sound plan. 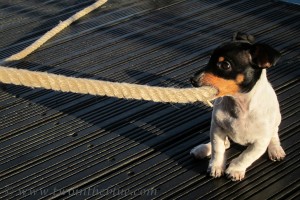 It has been a solid four days at sea with a stiff northerly wind blowing us south. The blustery weather from has delivered us quickly from the water-logged coast of wales to an entirely different land. Here the sun is shining on the palm trees lining the aviendas of northern Spain, and golden beaches are crowded with surfers and strollers catching the fading warmth of the lost summer. After only 90 hours at sea it seems we have been delivered to a new world – gone are the cozy pubs, tasty pies and familiar accents of the United Kingdom. Here the streets are filled with the musical chatter of Spanish and the caféterias are crowded with people well into the early hours of morning dining on an array of strange cuisine. Most prominently featured are the urchins which are seasonal delicacy of the moment. I’m all for new foods but I must admit … the prospect of tucking into a hot steak and kidney pie is a little more appealing than digging into the entrails of spiky sea urchins in search of the prized gonads. Not bad is you close your eyes though 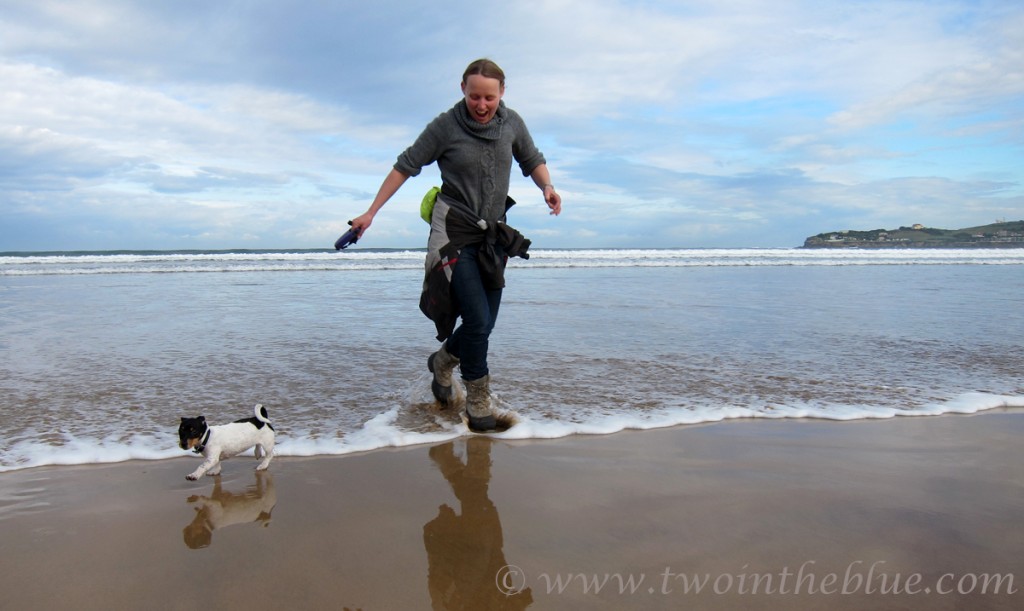 Looks like we’ll be spending a few days in the picturesque town of Gijón while we get in new supplies, fix a few broken pieces of equipment and stock up on vitamin D. Also we need to track down a vet to provide our smallest crew member with an inoculation against rabies which is required before we can move beyond the EU. While it may take a few days to tick all the boxes, the slower pace of Spain and the warmer weather here seems suited to a little recuperation …time for a siesta!