Dropping in for a cuppa 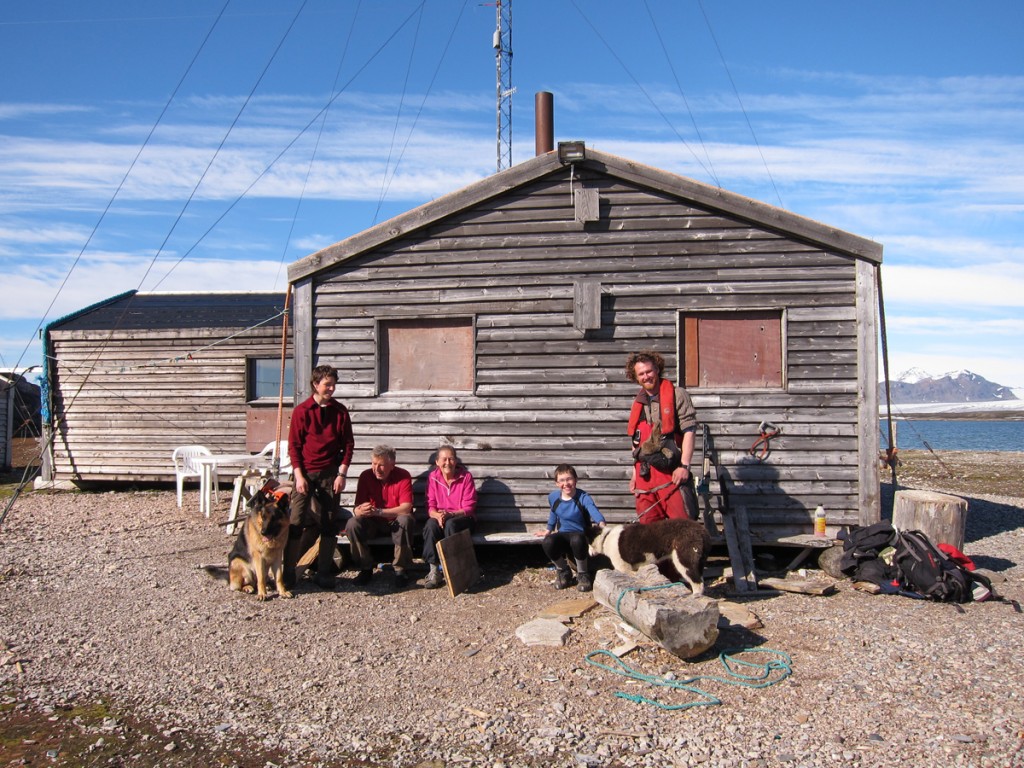 After a dash north we anchored the yacht in Eidembukta last night and rocked and rolled ourselves to sleep in a moderate swell. Thankfully however, the wind that has been plaguing us lately could not reach us in this scenic anchorage. A long sandy beach stretches before us, opening into the lagoon that is the final resting place for the Eidembreen glacier. Landing on the beach we quickly caught the curiosity of one of the many beach-prowliong arctic foxes who gave us a cursory sniff before making for the hills. We had planned to walk along the beach to visit the trappers hut in the next bay (Farmbukta) however our passage was blocked by the roiling water pouring out of the lagoon, complete with the occasional chunk of ice. While the dog seemed keen to cross we decided that this was not really the time and place for a swim and retreated to Brad (our tender)to motor over to the hut and meet Bjørn Henningsen and his family. Here we enjoyed a cup of coffee, cake and some marvellous hospitality at the end of the earth – the cold remote regions of the world are heated with a human warmth that is often lacking in our crowded centres. 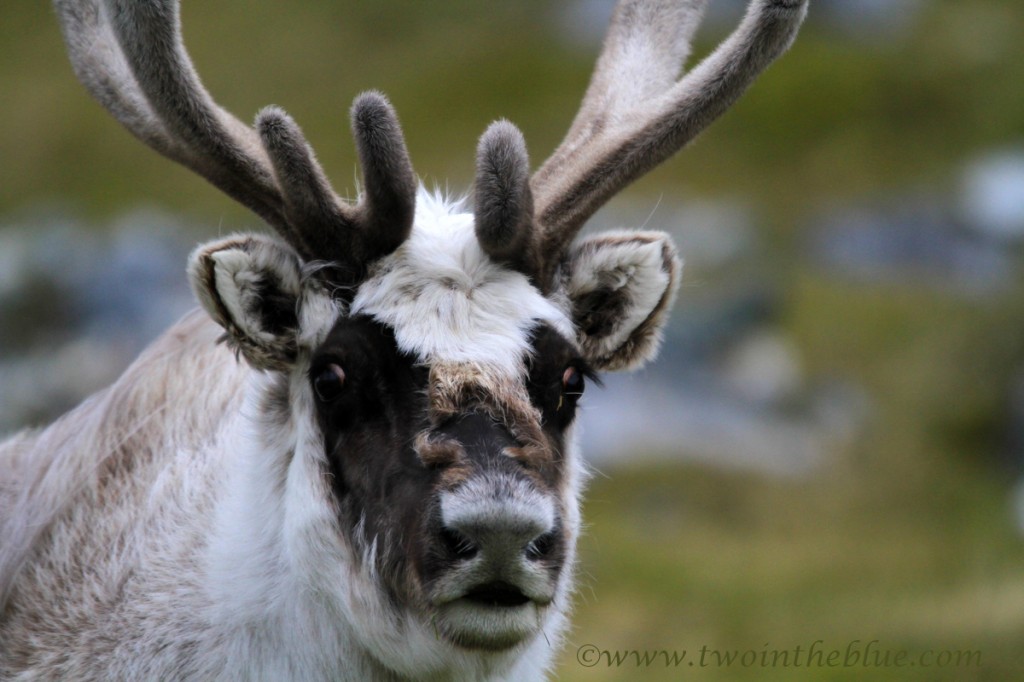 After a lumpy night’s anchorage in Van Muydenbukta, Bellsund, we awoke to a grey morning with the sinister black scree slopes of Ingeborgfjellet looming out of the mist and a cold wind gusting from the west. Not enough to deter these adventurers though! Soon we were forcing Shy (our dog – who had rather different ideas of what one should be doing first thing in the morning) into our trusty tender and heading for the beach of Vårsolbukta. Here little auks nest in profusion, foxes frolic on the beach, and the remains of the Northern Exploration Company gold mining attempt (they found none) add a dash of history to the stark Arctic scenery. Soon we were sitting by a scree slope watching birds flit back and forth from their nests and enjoying the gawky approach of reindeer with a curiosity in constant conflict with their urge to flee. Then, a quick cruise through a maze of twisted rock canyons and arches (a huge grin on my face as I ride the surge) and then back to Widdershins for a cup of hot soup. Another beaut day. 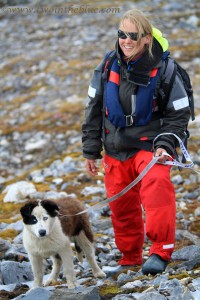 So, as you know “two in the blue” might better be called “three on the sea” as we try to accommodate an alarmingly large husky pup on our little yacht. The sail from Lonyearbyen to Trygghamna yesterday however, went without a hitch and our new crew member seemed to handle the slight swell well. As mentioned previously, this dog (named monster by the dog farm) was not having a great time with his fellow animals and is all-over a little shy. In fact we have decided that the original name “Monster” just didn’t hit the mark and we have now dubbed him “Shy Monster” or just “Shy” for short. While Shy is still taking some time to get used to the sea, he is starting to break out of his shell. Each time we take him for a walk ashore he is just a little more curious and engaged with what is happening, and today during a long walk he began to relish stomping his huge paws through the puddles and mud.

Whilst Shy was busy accumulating a healthy layer of mud for later disposal in the yacht, Leonie and I were wandering around Trygghamna enjoying splendid scenery (and in my case also collecting mud for later disposal). Above us, birds wheeled in huge mixed flocks around the cliffs looming overhead, and threw a cacophony of sound into the grey sky. Reindeers ambled over the rolling green moss that carpeted the ground below the cliffs, and the occasional young animal would wander up to within five meters of our party to give us a long sideways stare before returning to the more important matter of ingesting more moss. 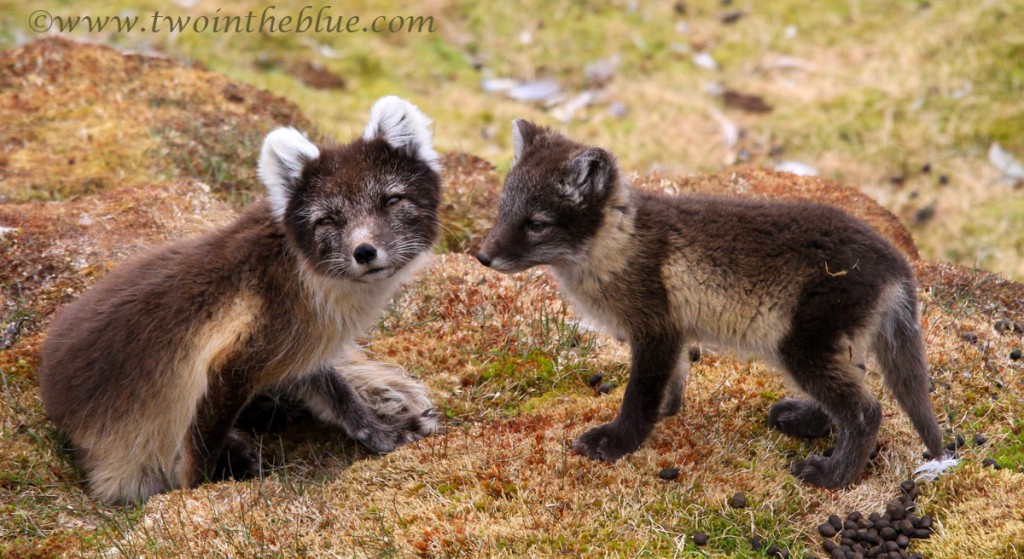 But for us, the highlight was without a doubt the Arctic foxes we found at-play in the foothills. The family of Mum, Dad and five pups were running about playing a game of tag and we got a chance to watch them for quite a while before they caught our scent and dissolved into the rocky surrounds. There was a particular moment when the mum gazed up at us as we struggled to contain our enthusiastic puppy – at the time her own pup was busy trying to crawl onto her head – and I’m pretty sure that we shared a moment of parental empathy.