After an amazing first day at Hornsund with Polar bears, ringed and bearded seals we explored the depths of the fjord, where four big glaciers tumble down to the sea from various valleys. Steering through the maze of smaller and larger bits of ice in front of the glaciers was quite a challenge, and I ended up bent over the bow of the ship trying to push away larger bergy bits. Luckily Widdershins is a tough steel yacht, so fortunately the pieces I missed didn’t do any damage. 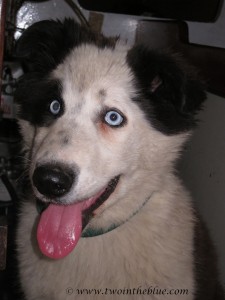 After an over-“night” trip we arrived in Longyearbyen, where showers, toilets and laundry almost seemed like luxury to us. Finally we were also able to go ashore – as long as you’re in a village you don’t need a gun in Svalbard. Luckily our papers were all in order, so registering and renting a big rifle was no problem. Longyearbyen has developed in the last few decades from being a small mining town to a more touristy center with cruise ships arriving regularly (then the population explosively doubles or triples), a large range of shopping opportunities, and there were even some pubs with nice arctic beer.

Now we’re almost ready to set off into the wild again – except we got ourselves a little additional challenge. We’ve been thinking about getting a dog for the journey for a while, and as it so happens we came across this puppy husky from a big dog-sledging farm, which was extremely shy and did not mix with the other dogs at all. So we decided to give it a try and provide him with a new home on Widdershins. So far this is a trial period, we will be back in Longyearbyen in four weeks, and if “monster” (that’s the name given him by his owner) does not like us, the yacht or the sea we’ll have to give him back. But we surely hope that he’ll open up and be our companion for the adventures to come!

Bear Island behind, bears beside

After a long passage from Bjørnøya in stormy seas we approached the grey coastline of Sørkapp in Southern Svalbard accompanied by a pod of white-beaked dolphins. These beautiful beasts kept pace with us for a while before leaping out of the water and disappearing and leaving us with the majesty of the rocky shore on the horizon. Ahead of us was a bank of grey cloud pierced by the occasional jagged peak and a sloping plateau of rock and ice merging with the mist to the east.  As we slowly drew near the grey pall dissolved revealing a stark landscape of ice and rock – glaciers clung to the valleys and the black rock seemed crushed and crumbling beneath the weight of ice and weather.

Sørkapp however, is a long way from the nearest safe anchorage. Thus these weary sailors gritted their teeth and sailed on looking forward to a respite from the constant round of four hour watches which is the lot of short-handed sailors on ocean passages. Eventually we dropped the anchor in Isbjørnbukta on the north of Hornsund and prepared to drop ourselves into bed for some slumber … except for the special problems of anchoring in the Arctic. A glacier tumbled to the sea just around the corner, and in the process of that tumble, various bergy bits and ice were released into the fjord and were attempting to make an escape to the open ocean. The only thing standing in the way: Widdershins, our yacht. Thus our planned nights repose was somewhat broken by hourly anchor watches and the occasional jaunt up to the deck to poke at the jagged ice to push it from our hull. 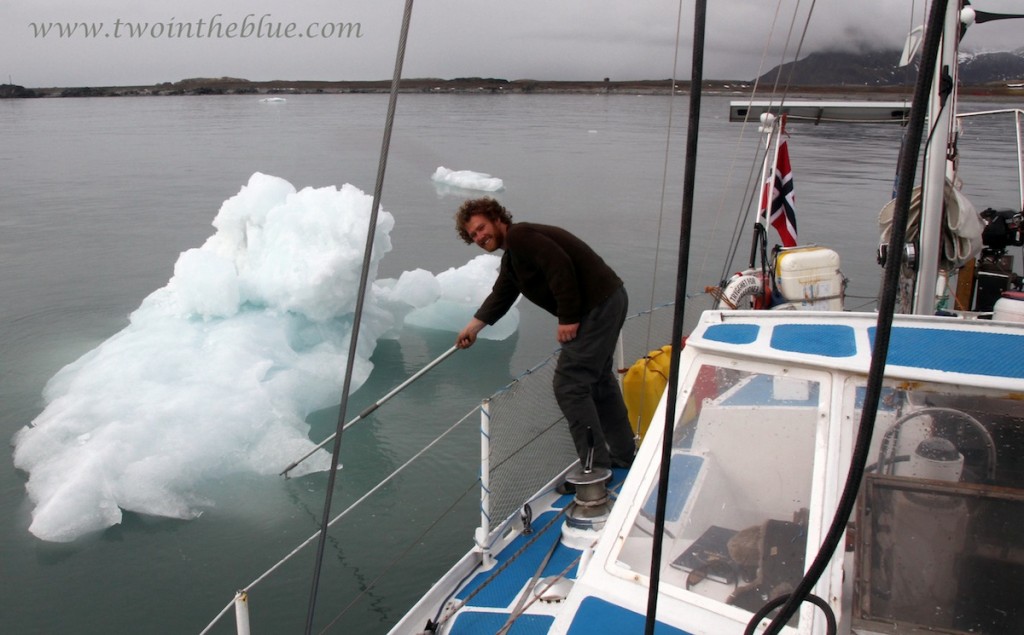 When we finally raised our weary heads from the bed we prepared to follow our plans of getting straight to Lonyearbyen (a 26 hour sail away) to get all the bureaucratic necessities out of the way. Except, that as we were preparing to set sail a crackle came across the radio and amidst the static we heard a few snippets about a polar bear and Hornsund. Following a couple of radio calls from our end to get further details we scrapped the plans for Svalbard’s version of civilisation and headed into the heart of the fjord to seek the bears. 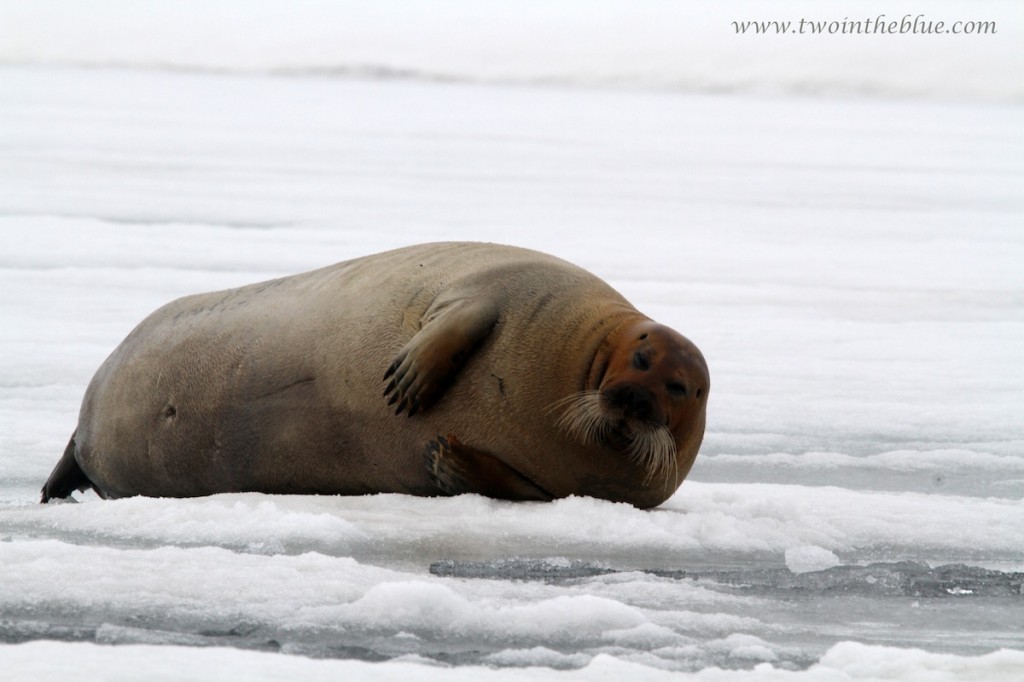 Within a few hours of starting our first day in Svalbard we were sitting aboard our trusty tender Brad and powering off towards a small drift of fast-ice which apparently harbored the apex of the local food-chain, that apex being rather above the occasional grubby adventurer. Teetering upon our little inflatable boat we rounded the corner of a small bay to find ourselves face to face with not one, but two polar bears. 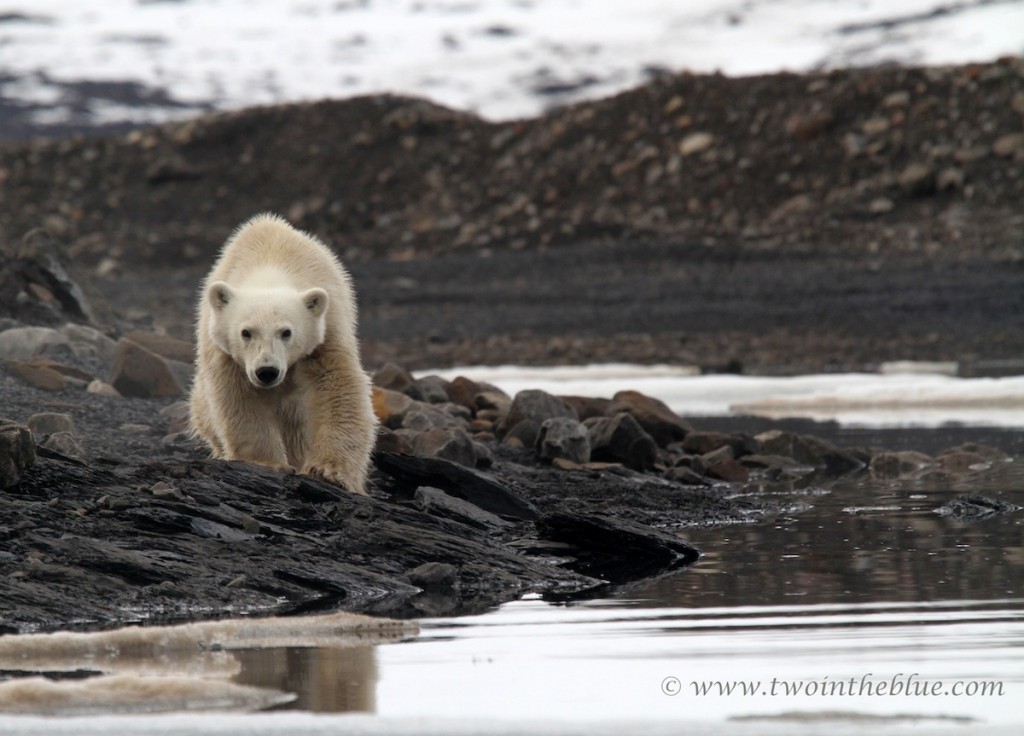 The bears were sitting on either end of the last patch of ice in the fjord and were hungrily watching the bearded seals and ringed seals lounging on the ice … I have an inkling that the seals are rather hard to catch and it did occur to me that a couple of soft white explorers might be an easy catch – especially since we currently had no rifle, this being the major reason for our planned first stop in Lonyearbyen. Thus we were a little nervous as we looked into the eyes of these powerful predators. However, it seemed that several days at sea had left a rather unappealing odor around us and the bears seemed content to watch us with an occasional yawn and perhaps a slight wrinkling of the nose. Jokes aside, this was the first polar bear either of us had ever seen in the wild and there is something awe inspiring, slightly scary and magic about sitting amidst the wilderness of the ice and watching these bears.