Lofoten is truly an amazing place. As we make our way through turquoise waters it is almost as if we are flying above the crystal clear ocean. Everywhere you look there are jagged peaks, each wearing a dusting of snow and Widdershins is constantly dwarfed by the sheer cliffs of the fjords. And what excites us most is that the landscape is by no means barren. Fish constantly break the surface in feeding schools and birds of a huge variety dive and swim about us … the anchorage where we lie now also has its own resident seal which gazes at us across the bay. If you’re brave enough to poke your head under the frigid water there are soft corals and what must be a spectacular underwater seascape beneath us. We haven’t been that brave yet, but we are working on our courage (helped along, as it happens, by a bottle of bootleg liquor acquired under the table in one of the rustic bar we dropped in). Perhaps we could squeeze a dive in? 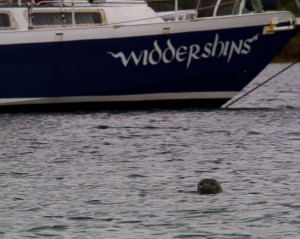 Another great thing about this part of the world is that there is plenty of sunlight . Perhaps too much. Right now our daily rhythm is a little messed up as we frequently sail well into the night, or go on long midnight walks. After a day sailing it is very tempting to anchor and then row to shore for a short walk – but it’s hard to tell when to call it a day when the sun won’t stop shining. There’s always the temptation to kindle a fire on the beach and gaze at the midnight sun or to scale one of the peaks to see the view. All this after-hours exploring leaves you a little weary and it’s sometimes hard to drag yourself out of bed…. Though a look outside the widow is generally enough to make us stir. 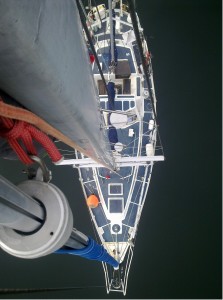 A late day’s sail as I spent the morning attaching the new Windex to replace our old one which didn’t survive winter. As a matter of fact I noticed the frayed remnants of a Windex on the ground near Widdershins before she was launched and remember thinking that some poor mug has lost his … turns out the joke was on me on the first day I set sail and looked up to see that the Windex (which tells you which way the wind is blowing and allows you to adjust your sail) was missing. So this saw me clambering up the sail early this morning with a wrench in hand while I tried to take the mounting of the last one off, and install the new device. Took a few attempts but now Widdershins is topped by a sparkling new Windex that should see us through our long voyage.

Once this was all fixed and a few chores done (have you ever tried to wash your clothes in a small sink …not much fun) I was off for Risør. A really pleasant surprise was a group of over 30 seals lying on a rock just our side of my nights anchorage. These harbour seals are much maligned as they commit the ultimate sin of competing with us for fish! Fancy that the cheeky buggers! Needless to say many people shoot them on site, but the good news is that numbers are finally returning to the south coast of Norway and hopefully a group of lounging seals on a rock will be a common sight in the days to come. 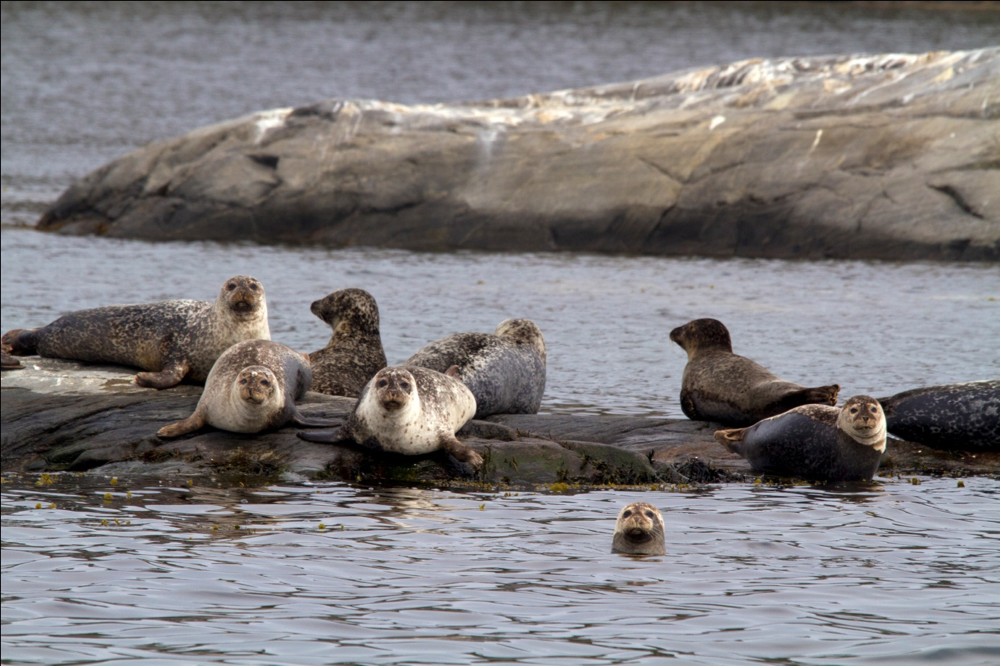 Now I’m in Risør, home to the wooden boat festival. During the festival the town is crowded and boisterous but right now it is just another sleepy town by the water. A pleasant place to stay the night with power to recharge my laptop!