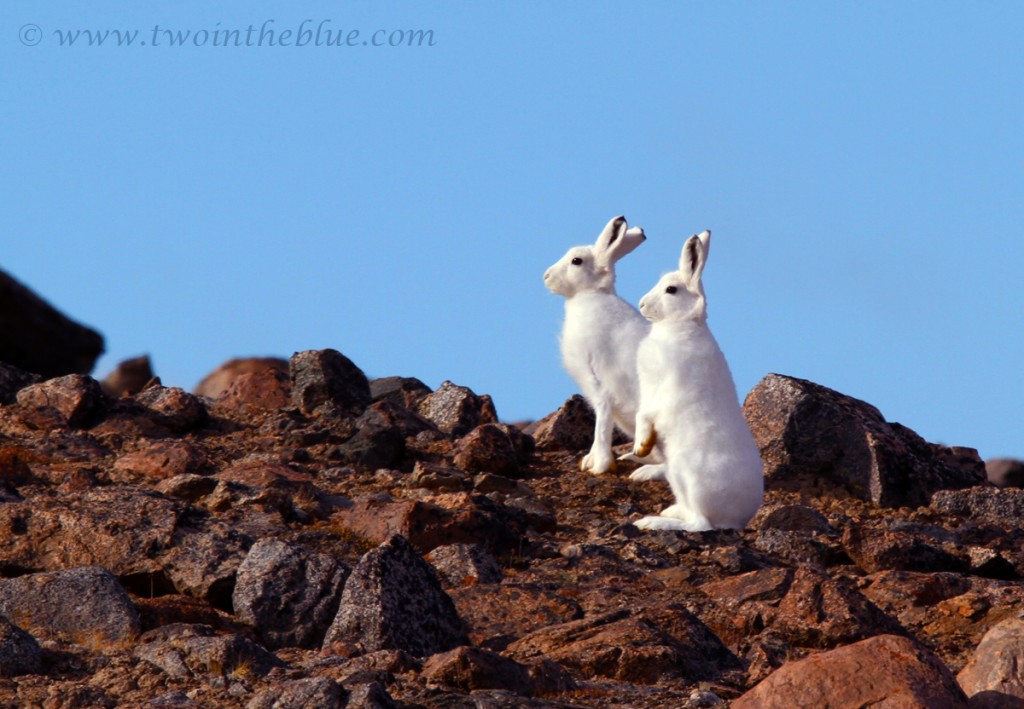 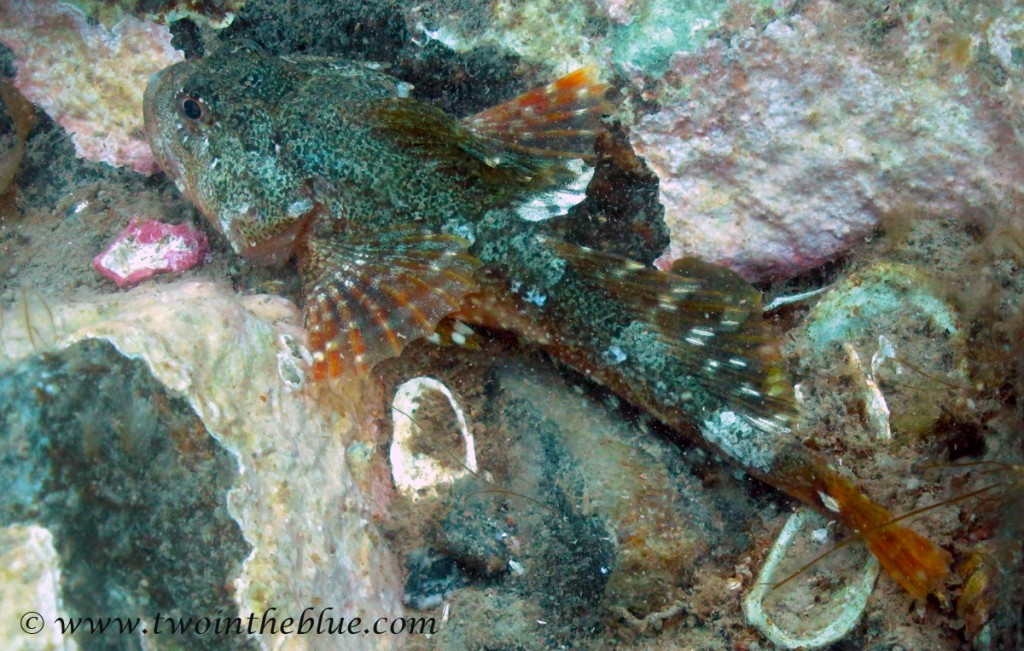 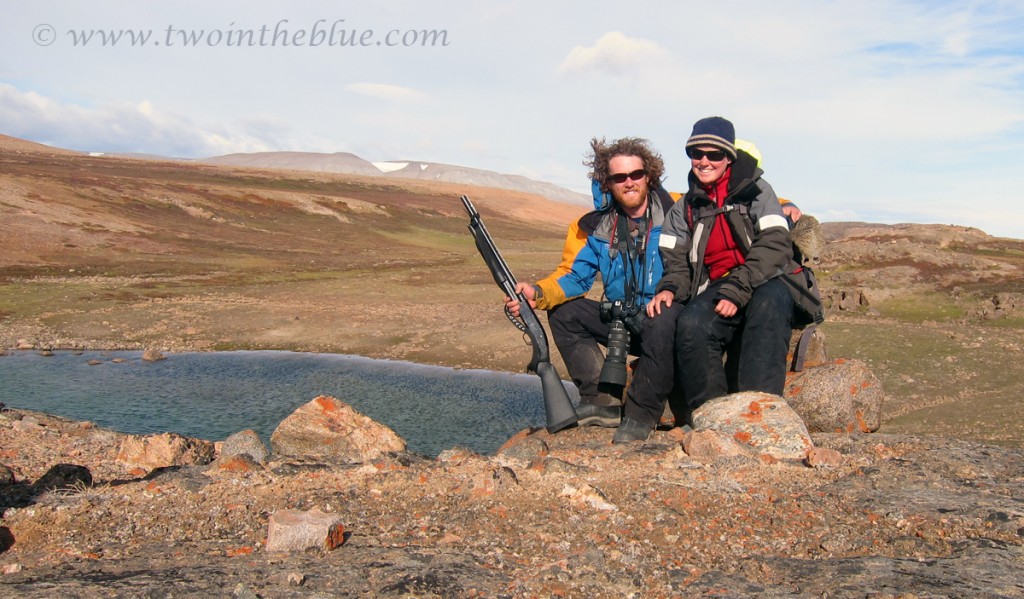 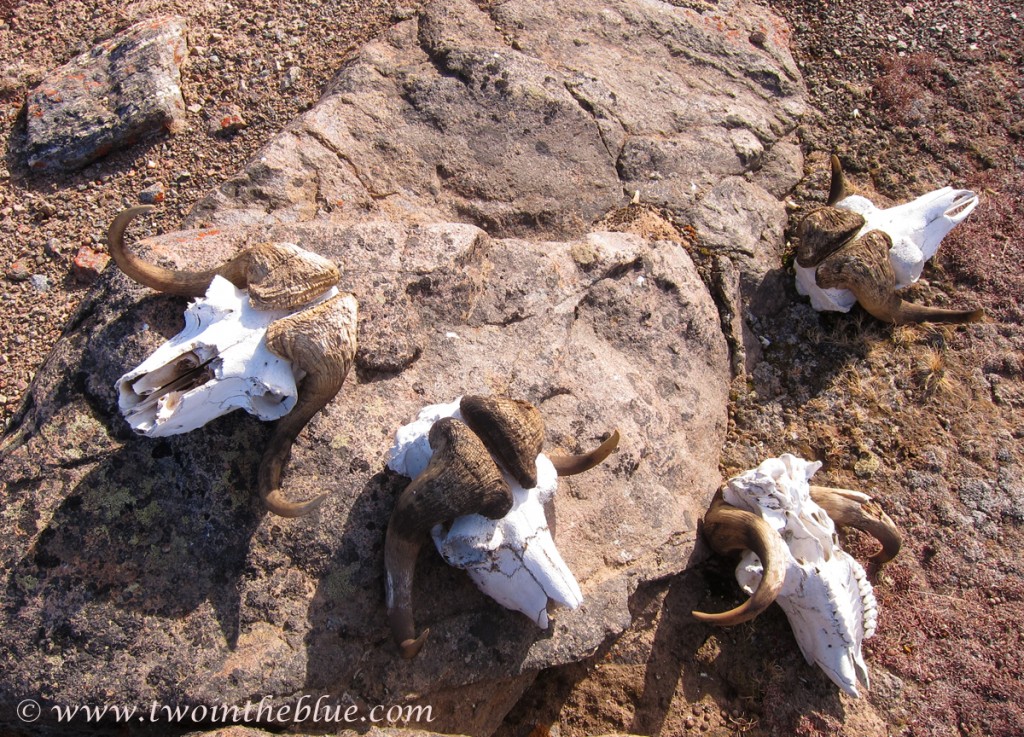 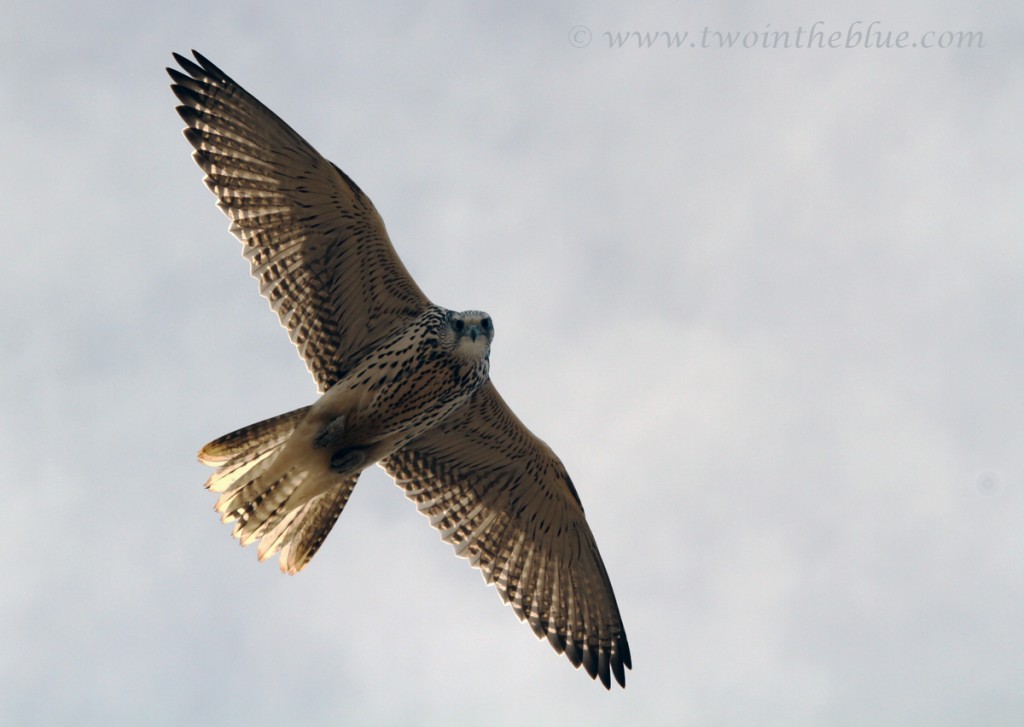 Of Ice and Ittoqqortoormiit 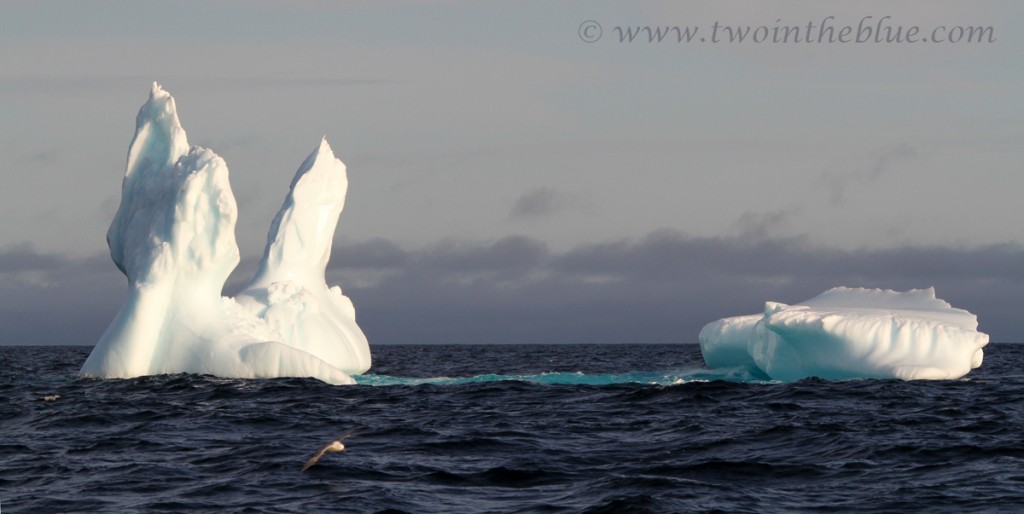 Last night the fog that had been shrouding our passage across the Greenland Sea lifted to display a bright sun in a glorious blue sky. The horizon was punctuated by the first icebergs of the passage lined up like the teeth of the world. As the sun lowered towards the west we found ourselves skirting towers of ice reaching with craggy fingers towards the heavens. However, the new experience of night at these latitudes promised a scary new adventure – sailing through ice in the dark! As it turned out we had pretty clear seas for most of the night with only the occasional berg glowing white in the gloom. It wasn’t until the darkest hour of the night that we finally found our nerves a little frayed as we suddenly hit bands of dense fog…and those scattered dots on the radar … waves or ice? Oh …. ice ….. lots of it! 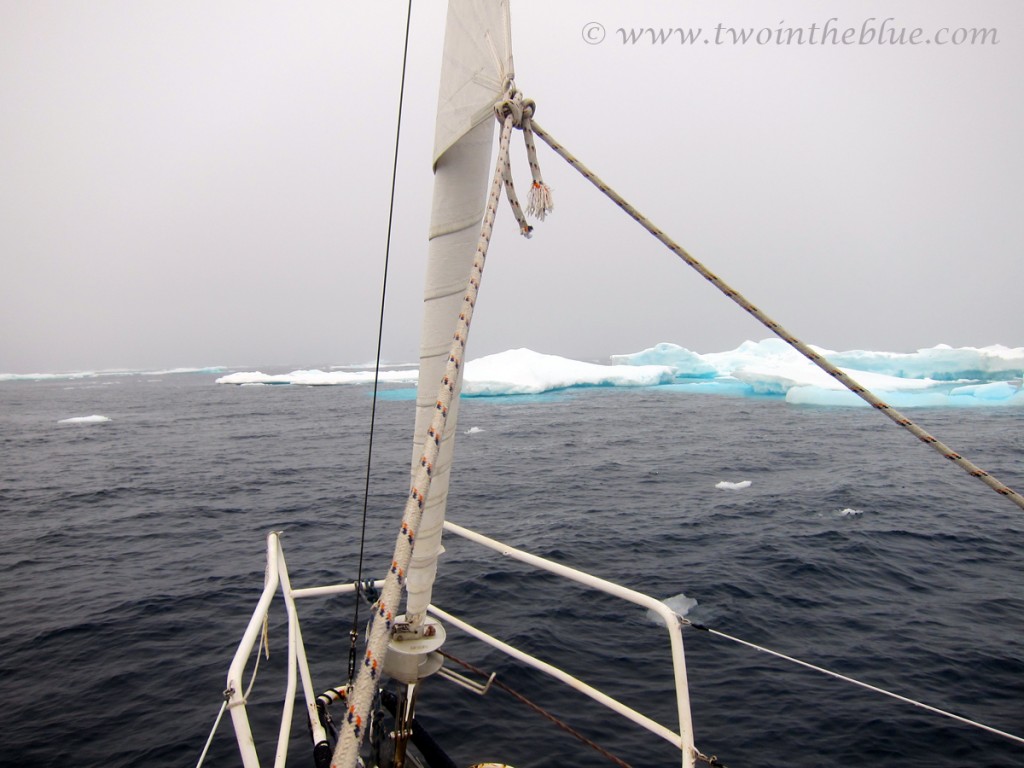 I have to admit my nerve failed me …. Rather than steering blindly through an unknown field of ice I dropped the sails, did an about turn to steer around the nearest few bergs and then settled down to drift amongst the ice until the light returned. It turned out to be a good choice. The scattered bergs we stumbled across were actually the outliers of quite a substantial band of sea ice that it took quite a few hours of twisting and turning to get though. The ice here is very different to Antarctica where generally you encounter single year sea-ice that is low and flat in profile. Here the sea ice is ridged and hummocked from the immense pressures of the drifting ice pack of the pole. Occasionally towering chunks of multi-year ice stand like monsters amidst the other flows and our poor little Widdershins looked like a toy boat amidst the splendid and scary sight of the Arctic pack ice. 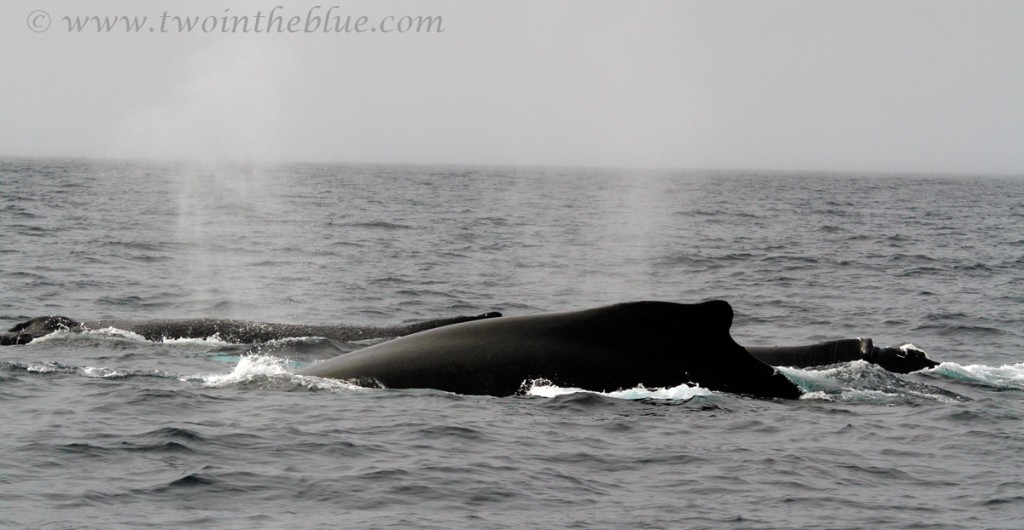 Luckily dodging ice was only a limited diversion and soon clear waters opened up with only the occasional majestic berg bobbing on a horizon that was now clear and crisp. Passing the band of ice seemed to be like crossing a barrier into the true arctic – suddenly the temperature plummeted below zero, there was ice on the rigging and when the sails clapped in a gust of wind they sendt plates of ice crashing to the deck. We had also passed into whale territory – soon after the sea-ice slipped behind in our wake we were seeing the occasional blow of a whale on the horizon and soon we had the tails of humpback whales gracefully tipping up beside the boat as the beasts slipped into the depths. We encountered several; groups of humpbacks, some of which circled the boat very closely to cast a curious eye at us, as we in turn ran euphorically backwards and forward watching these beautiful animals.

Regardless of the spectacular end to the passage these weary sailors were looking forward to a rest, and the sight of the settlement of Ittoqqortoormiit (more pronounceabely known as Scoresbysund) was a welcome relief. Against the forbidding backdrop of bare rock and a distant ice cap, this small settlement is a small island of humanity in a rugged, icy land. However, it is also a community like nothing else we have encountered. Here subsistence hunting is the general rule – with only 2 supply ships bringing fresh provisions each year the local people rely very much upon harvesting seal, muskox, ducks and polar bear to provide the nutrition they need. Hanging up beside the drying clothes in front of the houses it is a common sight to see the shaggy pelt of an musk ox, or the white hide of a bear sending its rank odour into the breeze. 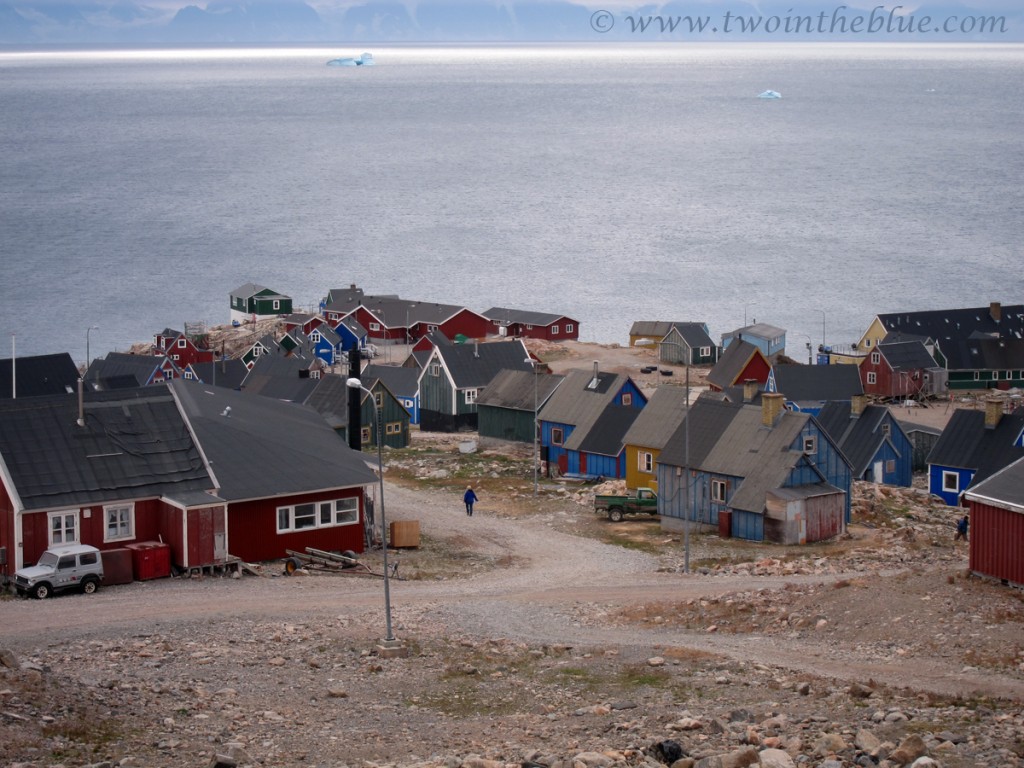 After a short period of awkward glances and shy hellos the people here have provided a warm welcome to us – in fact we can barely walk down the street without being accosted by children attacking us with imaginary guns or other inventive games of “tourist baiting”. It is another world here, but it a world that offers serenity and a pace of life that allows the community to develop its own unique identity. Here people count the seasons not the hours and there is no rushing. In fact it will be a hard place to leave.