Widdershins on the water 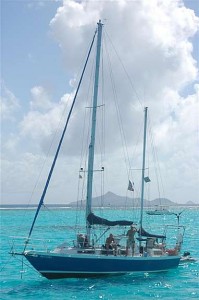 I arrived in Oslo in one piece after an eventful maiden voyage up the Oslo Fjord (about 130 km). Unfortunately Léonie couldn’t make it to Oslo so it was single handed most of the way followed by a final leg with an Indian chief from Alberta and a film crew making a documentary.

Friday
I left on Friday morning and after a few hours of sailing to get used to the new yacht, the wind died down so I decided to turn on the motor to make some speed. Of course it wouldn’t start. So after practicing some newly learned Norwegian curses I resolved to sail slowly up the fjord until I reached the town of Åsgårdstrasse which according to my sailing guide had a chandlery where I could get a new battery (I suspected this was the problem). I finally made it to the town only to find that a new breakwater makes it impossible to enter under sail when the wind blows Westerly. The wind blew westerly. Anchored for the night outside the harbor entrance and hoped the anchor would hold.