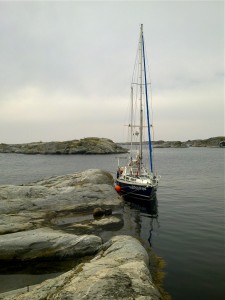 After an early morning departure from Lillesand where I spent the last two days I quickly cleared the narrow entrance and set sail for the West. Today’s task was to catch a fish as a few previous attempts had resulted in me leaving several expensive items of fishing tackle on the sea floor with nothing to show for the effort. So a short sail and I turned in towards the complex of small islands around Agerøya and found a likely spot. Two minutes later I had two nice cod in the bucket and was ready to sail on. Actually it was just a little too easy after having built myself up to spend the day hunting the crafty cod that had thus far eluded me, but fun none-the-less and two is plenty for the day’s meal. So another short sail and I arrived at lovely Knuthavn were I pulled up alongside and started cooking up a storm. Lightly floured cod fillet cooked in a lemon cause and served on a bed of spiced couscous…. Not bad at all and splendid part of the world to enjoy good food.