Waving the white flag: the surrender of sea ice

Despite the continued clucking of climate sceptics the sea ice in the Arctic is continuing to dwindle each year. Sea ice in the 2011 season represents the second-lowest summer ice extent since records began (http://www.bbc.co.uk/news/science-environment-14945773) and all signs indicate that this retreat will continue.

Some are hailing the retreat as an opportunity – new shipping lanes are emerging and resources historically guarded by impenetrable ice are now opening up. Soon the millions of barrels of oil and gas locked beneath the Arctic seafloor will be ripe for the taking. Super tankers will be able to carry the precious fuel though the dwindling ice fields to western markets were we can pump this Arctic gift into our SUVs and trucks to burn. Some will wrinkle their noses as the fumes of Arctic oil scratch at their sinuses as the carbon escapes our exhausts to join the army of anthropogenic gases circling above our planet to continue the attack on the ice. 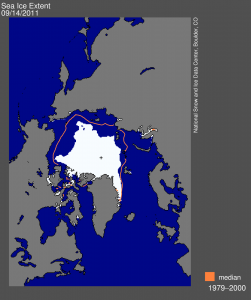 The Arctic is not entirely barren – indigenous people have called the frozen north home for thousands of years and to local communities the retreat of the ice represents the retreat of a lifestyle that defines them. The lost ice means that many of the animals that the Arctic people rely upon are also lost. Certainly, there are also opportunities that come in the wake of the retreating ice…. but what good is a fist full of oil stained cash when the larder is empty?

And, of course there are other less human eyes that see the retreating ice. Though comprehension may be beyond animals such as the polar bear and the walrus, the ice unravelling beneath their paws and their flippers may be flagging the end of their species. Many arctic animals depend upon ice as a platform for breeding or hunting in the short summers of the north. No ice may mean there is no future for many of the species we love to see in our BBC documentaries – a disappointment for many lounge chair naturalists certainly, but a disaster for the species involved.

For two in the blue the retreat of the ice may make our trip north next year a little easier, less ice means the way is clear to explore more of the amazing coastlines of Svalbard and Greenland. A thrill for us certainly, but ultimately a poor consolation prize.  In a way it feels like we are joining the gold rush flocking north in the wake of the ice – joining the industrialists sailing north to seek their fortunes amidst the remnants of the ice. I only hope that we leave the Arctic a better place when we turn south again. We head north to records the surrender of the sea ice, and I hope that a few may listen to the cry for mercy.

One Response to Waving the white flag: the surrender of sea ice